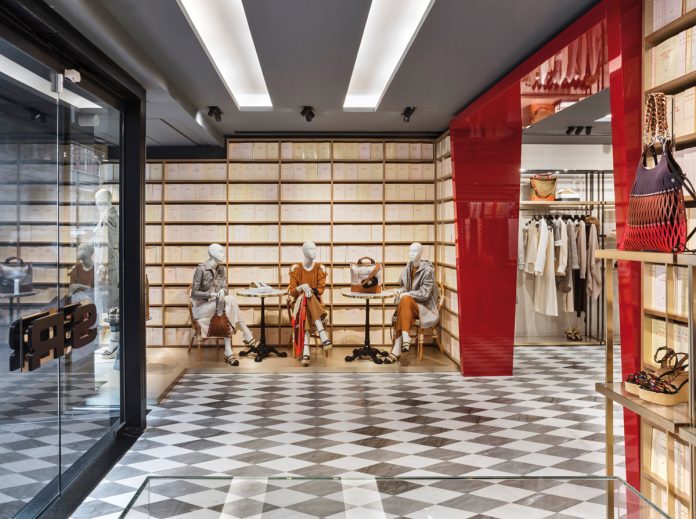 “It is the woman who animates the dress, not the other way around: the provocation is the woman, never what she is wearing,” to quote the famous words of French designer and writer Sonia Rykiel. Indeed, it is the unconventional spirit of the Rive Gauche in Paris and the Bohemian style of the French fashion house that you inhale and perceive in the first Spanish flagship store among the 19th-century buildings of Calle Coello, a street famous for its luxury shopping.

The new concept was developed by architectural firm Vudafieri-Saverino Partners, which is based in Milan and Shanghai and has acquired experience in fashion retail over the years, collaborating with brands such as Delvaux, Pucci, Tod’s, Roger Vivier and Moschino. The main goal for the architects was to create, within the 165 sq m boutique, the typical atmosphere of Parisian cafés littéraires, where customers feel free to choose their clothes and to create their own style, respecting the body’s freedom and without formal constraints or limits: this has always characterized Sonia Rykiel’s pioneering approach. On the outside, the white backlit logo stands out due to the contrast with the shiny black of the covering, while the fabric curtains feature the opposite effect: black lettering on a cream-coloured background. Walking among the walls covered by a full-height bookcase containing works from the historic French Gallimard collection, you pass through two portals that are iconic elements of the boutique.

They are red, bright and sensual like the nail polish that certainly adorns the hands of women who touch and test the fashion house’s fine fabrics. Customers’ heels rest on the sophisticated marble floor, which is decorated with a two-tone elongated diamond pattern, cross the portals and reach the heart of the store, home to the main collection, and the Salon, a modern boudoir with cognac-colored leather sofas, tailor-made poufs and blue velvet curtains that stand out thanks to the light emanating from the large Santa&Cole chandelier. In the dressing rooms, the sound of tapping heels is muffled by the soft pearl-gray carpet, a color that plays with the light and neutral painting of the walls and the dark gray ceiling.

The fine decor of the rooms features stylish metal finishes such as pale gold satin and black chrome, contrasting with the roughness of the wood. It is all custom-made, including the shelves with a gold metal mesh combined with glass, as well as playful and pop details such as the colorful bookcase printed on paper. Showcases and dressing rooms are distinguished by a bistro style with the Thonet table and the Martino Gamper chairs.