Since 2006, King’s Cross area has been undergoing one of London‘s most far-reaching urban regeneration projects. Huge amounts of investment have been pumped into real estate and design to transform a disused industrial area into a new section of the city – complete with its own N1C post code. A tapestry of streets and squares, a new area named Coal Drops Yard – a mix of buildings for residential, offices, stores and galleries, bars and restaurants and schools and universities – will open to the public on 26 October. Designed by Heatherwick Studio, it’s hoped the area will become a new destination for retail and restaurants, connected by public spaces. 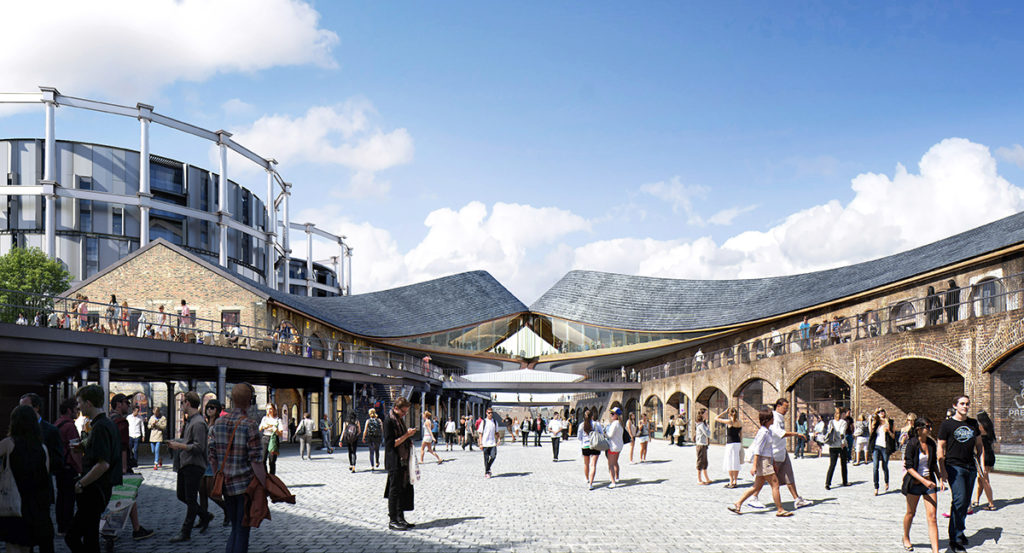 The original site contained two long, cast-iron and brick buildings from the Victorian era, one facing the other. In the second half of the 19th century, the were used as storehouses for the city’s coal.

Abandoned in the 1990s, having long been turned into offices, warehouses and clubs, the buildings have been reinvented as part of the regeneration project. The architects were keen to create some conceptual and structural coherence between older structures – restored and adapted as much as possible – and new architectural features such as the sloping roof. This is especially clear in the way the two internal fold of the roofs extend for 35 metres and become “curved ribbons”, meeting in the middle of this unique new structure.

It’s an example of how it is possible to take existing structures to the next level by incorporating new elements, such as the suspended floor with vast, panoramic glass façade, which serves as a 20 metre-high roof for the open space below, a public square that can be accessed from every angle. The complex encompasses a total of 9,000 square metres, divided into spaces for shops, restaurants, cafés and events, with 55 retail units of different sizes.

London: the place to be for design lovers

Picturesque environments in the heart of Puglia.

From design to sports, innovation comes this way