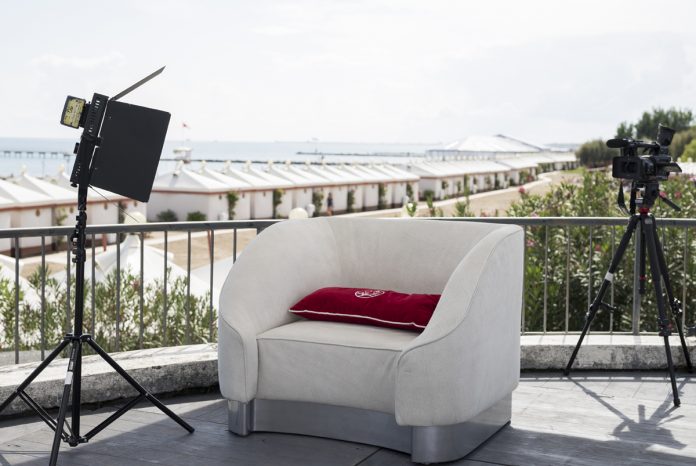 A range of iconic Bizzotto products, including a new version of Wave, which was unveiled at this year’s Milan Furniture Fair, were chosen to furnish the Terrazza Mediterranea and Hollywood Celebrities Lounge at Venice 75. Running between 29 August and 8 September, the legendary international film festival captured the attention of the industry – but there were plenty of luxury and design products to enjoy besides the cinema

Situated a stone’s throw from the Casino, the Terrazza Mediterranea featured the new version of Wave – one of Bizzotto’s most famous pieces. The chair has been enhanced with a new leather finish and collection of velvets, all of which merged seamlessly with the feel of the festival. Completing the effect were sofas from the Infinity series, upholstered in ivory-coloured Nubuck leather.

The Ikat poufs (in red and grey) and wooden Sidney coffee table with detailing in resin and gold – another of the legendary pieces synonymous with the Bizzotto style – contributed to the glitzy feel at the Hollywood Celebrities Lounge, the exclusive area in Venice Tennis Club reserved for VIP guests. Bizzotto’s luxurious finishes, quality, attention to detail and contemporary lines, not to mention the odd bold – and ingenious – choice, have helped the brand carve out a clear, recognisable position in the crowded luxury market. And in an industry that always rewards brands who can set themselves apart from the crowd without losing their identity, Bizzotto is enjoying the fruits of its labour.

A contemporary brand for Asnaghi Interiors