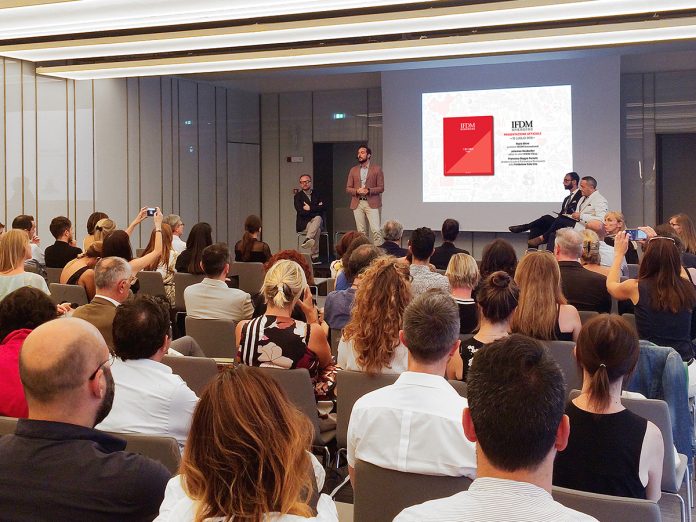 The evocative landscape of Lake Como and the exclusive hospitality of Hilton were the ideal background for the presentation of the new IFDM China project, an editorial initiative promoted by the Marble publishing house, entirely dedicated to professionals in the Chinese market, in the form of two new publications (Contract&Hospitality Book China Regional and IFDM Magazine China issue) that will make their debut in September.

Tuesday evening, the new Hilton Lake Como hotel welcomed the main figures of this project: publisher Paolo Bleve and the future Editor-in-chief of the regional editions, Johannes Neubacher, a well-known name in the Chinese publishing scene with decades of experience in the area in the fashion and luxury sector.

“Just three years after the launching of the first Contract&Hospitality Book we are proud to announce the birth of this new editorial initiative that supports the long-term project of IFDM to generate international connections between professionals and companies in the field of interior and furniture design – says Bleve – In just a few years the exclusive Contract Book collection has gained a prestigious position in the world of design, becoming an authoritative reference, recognized and appreciated worldwide. Hence the decision to dedicate a special editorial program to China, which for the next decade will continue to be one of the main growth markets for all the companies that know how to approach it with a strategic vision. A key area for the expansion of international brands where is possible to create new synergies and consolidate partnerships with local professionals.”

And precisely the key concepts of ‘synergy’ and ‘partnership’ are the basis of the proposal, which sees its exclusivity in the collaboration with the Liaoning Science & Technology Publishing House group – through which IFDM acquired the publishing license and government rights for publication and distribution in the Chinese territory –, the widespread distribution network conceived for the two editorial creations (a system of trade fairs, hotels, stores, the world of interior design and architecture, embracing over 30,000 professionals), and in the definition of a local operating office that works alongside the Italian main editorial office, to ensure direct supervision of the sector, as well as logistical support and constant updating of contents.

“The magazine – as Neubacher pointed out – inaugurates its first hub in the heart of a strategic country such as China, which is currently offering extensive business opportunities to the furniture sector”. This statement was also supported by Francesco Boggio Ferraris – Executive Director School of Continuing Education of the Italy-China Foundation – who was asked to support the Chinese IFDM project with a socio-economic analysis of China and a forecast of data relating to the furniture, design and luxury sectors.

Today experts speak of the normalization of the Chinese growth – after the exponential development of recent years – with a wider distribution of consumption that embraces major social classes and a transformation of the economic model based on internal consumption rather than exports, as was the case in the past. The rate of urbanization is constantly increasing and this year it will reach almost 60% with 793 million people living in the city: “This phenomenon involves an increasingly pressing demand for housing units that, as far as the big spenders are concerned, translates in 75% of cases into a search for exclusive and custom-made furniture, with a focus on historic high level brands – explains Ferraris – In fact, the furniture industry is among the sectors of Made in Italy that export more and more to China playing an increasingly important role – it has reached the seventh place in the Top 30”.

The ‘restorative’ design of the XXII Triennale of Milan