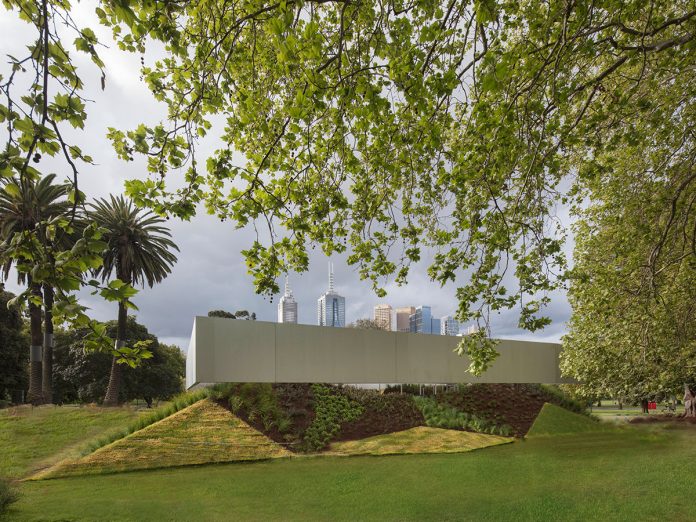 MPavilion‘s story began in 2014 after the Naomi Milgrom Foundation proposed the idea of an original temporary space in the Queen Victoria Gardens, commissioned every year by a new architect. Between October and February, it will be a true cultural workshop that promotes interaction between people, the exchange of ideas and the launch of new initiatives: four intense months of cultural events and speeches, conferences, shows, workshops, installations and meetings. After this period, it will be moved to another location in Melbourne to once again play a role in the life of the Australian community.

The heart of the pavilion designed by Rem Koolhaas and David Gianotten is represented by two platforms – one fixed and one mobile –, positioned in front to almost form a circumference. The larger platform, which is static, appears to be dug into the ground, home to 12 different species of Australian flowers, and acts as a buttress behind it. The smaller platform be rotated, allowing the fulcrum of the pavilion to be changed and altering the perspective between the audience and the speakers.

The stage is dominated by a massive projecting roof (19 x 19 meters), a 2-meter-high mechanical grid structure made of aluminum that contains the lighting system and the curtains. Thanks to its static and dynamic parts, the pavilion, whose design recalls an amphitheater, can be transformed as required.

Now MPavilion 2017 has been given to Monash University in Clayton (in south-east Melbourne) and positioned on the lawn at the entrance to the new building used for education and teaching. MPavilion 2018 will be designed by architect Carme Pinós of the Estudio Carme Pinós firm in Barcelona.

Jacob’s Ladder: connecting the sky and the earth through art