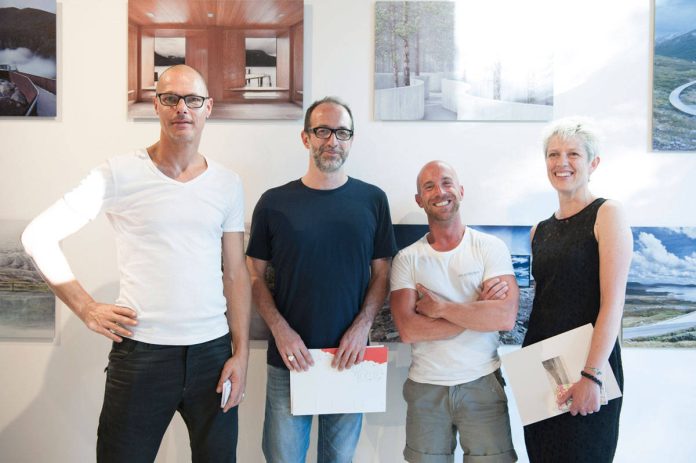 Finding some relief from the oppressive heat of summer in Milan has never been as easy as it was late afternoon yesterday, Thursday 23 June. Via Bergognone 27, a short distance from the exclusive Tortona area. A shiver of cold and emotion runs down the spine of everyone attending the opening event of the Norway. Architecture, Infrastructure, Landscapes exhibition in Spazio FMG per l’Architettura. A shiver in response to the evocative power of the photographs by Ken Schluchtmann, a German photodesigner whose images transported us to the heart of the Norwegian landscape.

22 photographs will be on display until 22 July on the walls of the exhibition space, portraying architectural buildings, in particular locations in Norway. These buildings are not anonymous: they were created by architectural firms of international renown, such as Snøhetta and Manthey Kula. Both attended the inauguration of the exhibition, together with the photographer.

«The images that you observe are not arbitrarily chosen: they are part of a project that is very close to my heart – Schluchtmann remarked during the presentation – Since as far back as 1996, I have experienced these places with all my being, so that they have become part of who I am».

The exhibition’s curator, Alessandro Benetti, has chosen to arrange the exhibition in a way that reflects Norway’s geography, beginning with the building in the most southerly part of the country and moving up to the most northerly part. Each picture is accompanied by technical materials directly provided by the designers (images, drawings and texts) and summaries in short pamphlets.

Landscape, a constant feature in Schluchtmann’s work, provides a background for every immortalized architectural object. The photographer travelled a total of 20,000 km around the dense Scandinavian road network to achieve this result. The starting point for the buildings is the road itself: each building comes to life along the paved routes that are largely used for tourism, which has significantly increased. National Tourist Routes is the government program that promoted the initiative, creating in 2005 the first of the 100 projects planned for 2023. Fifty professionals, including architects, landscapers and designers, are involved in this challenge amidst breath-taking scenery and hostile environmental conditions, which have led to the use of high-quality and highly-resistant materials.

The time has come to list the architectural firms that contributed to the photographic project. Haga&Grov, Saunders+Wilhelmsen, Carl-Viggo Hølmebakk, Snøhetta, followed by Knut Hjeltnes, Reiulf Ramstad, 3RW and finally Manthey Kula, 70°N Arkitekture and a-lab are among the exclusive firms responsible for designing the structures. Not only cultural buildings – such as the Hammerfest Arctic Culture Centre by a-lab (which borders the Arctic Circle) and the Alstahaug Petter Dass Museum designed by Snøetta – but also bridges to make fishing safer, such as Myrbærholmen Fishing Bridges, designed by Manthey Kula. The Hjerkinn Reindeer Pavillion (Snøhetta), the Stegastein Lookout Point (Saunders+Wilhelmsen) and the Sohlbergplassen Viewpoint (Carl-Viggo Hølmebakk) blur the boundary between architecture and art: this last designer also took on the challenge of designing Jektvik Ferry Quay Area, focusing on the concepts of transparency and translucency. The same subject with a different approach characterizes the Linge Ferry Terminal by Knut Hjeltnes, a small building covered by glass that offers a unique view of the fjord. Haga&Grov with Svandalsfossen, 3RW with Askvaagen and Reiulf Ramstad with Trollstigen National Tourist Route Project have been involved in the construction of scenic spots that leave you breathless – they are so striking it is hard to look away. Finally, Grunnfør Bike Shed Meditation Room, by 70°N Arkitekture, allows visitors to shelter from the raging wind of Grunnfør on Austvagøy.

«A series of architectural and artistic works of the highest quality – Luca Molinari, curator of Spazio FMG, concludes – that not only meet the functional needs of travellers, but also become living places in the landscape and places of exchange between architecture and nature».

Wagering on youth is the right choice

The monsters of Moooi

A passion for Passoni