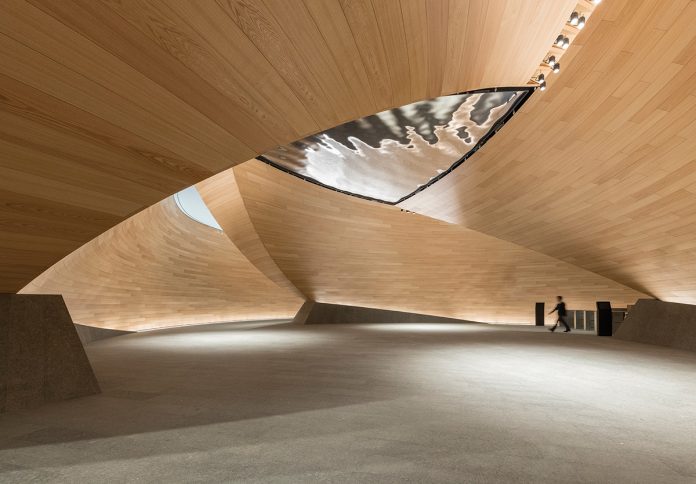 Communication is about connecting with others and exchange. Based on these values, Bloomberg has founded its empire consisting of TV, press agency, radio, internet and publications. Its new London-based European headquarters are a magnificent example of how architecture is capable of embodying a company’s core while also letting it breathe. Lord Norman Foster has hit the nail right on the head. The award-winning British architect and designer’s firm, Foster + Partners, has branches all over the world with over 700 employees.

With its massive and material volume, the complex occupies an entire block of the City, set between the Bank of England, St. Paul’s Cathedral and St. Stephen’s Walbrook church. It is perfectly inserted in the time and place, so much so that it manifests itself as a natural extension of the city’s financial heart. It holds the highest standard of sustainable certification – BREEAM – in virtue of the building itself, its design, construction and management processes, with reference to international models. 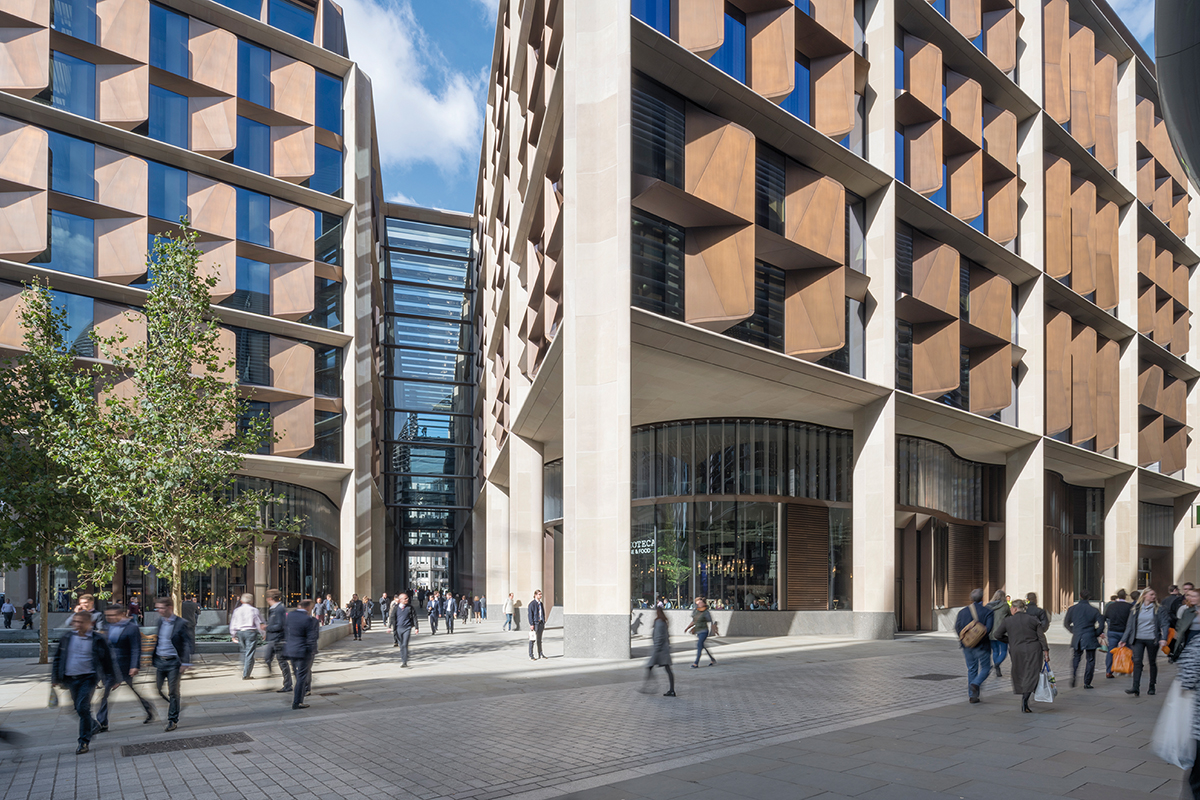 Already outside, the intention of uniting people who work together is palpable, with a series of bridge-walkways connecting both structures, forming a glass and metal arch beneath which pedestrian ‘traffic’ flows, along an ancient Roman road, flanking a succession of cafés and restaurants, up to three public squares which precede the main entrance. 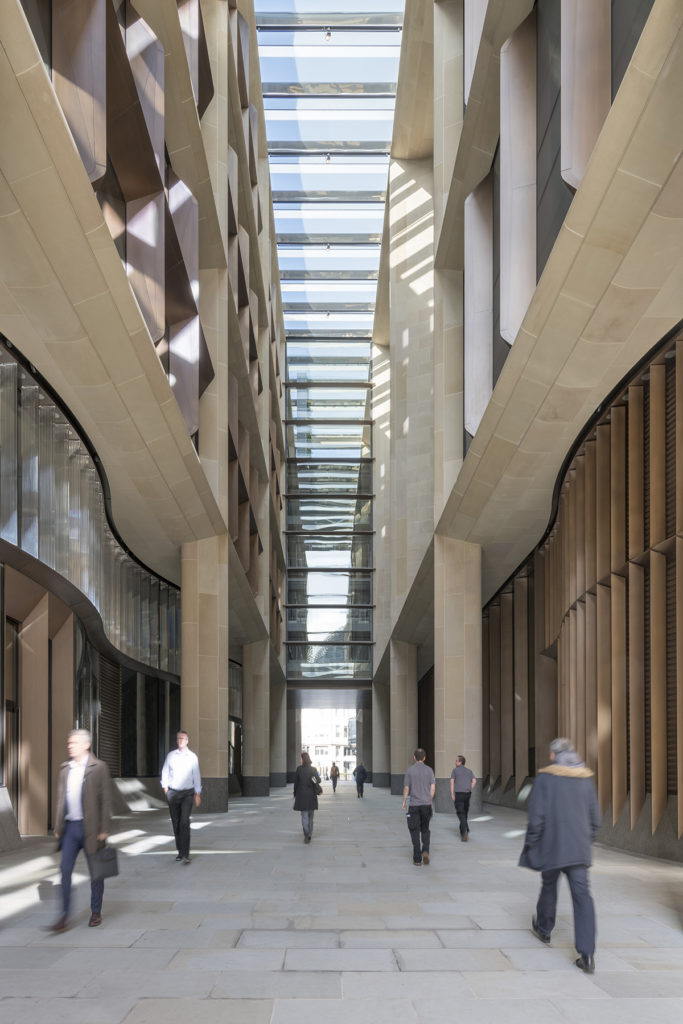 The awe-inspiring façade is defined by a sandstone skeleton staggered by a regular sequence of bronze wings, a sort of giant Venetian blind designed to shield the sunlight along the entire length of floor-to-ceiling windows, while also constituting a natural ventilation system. 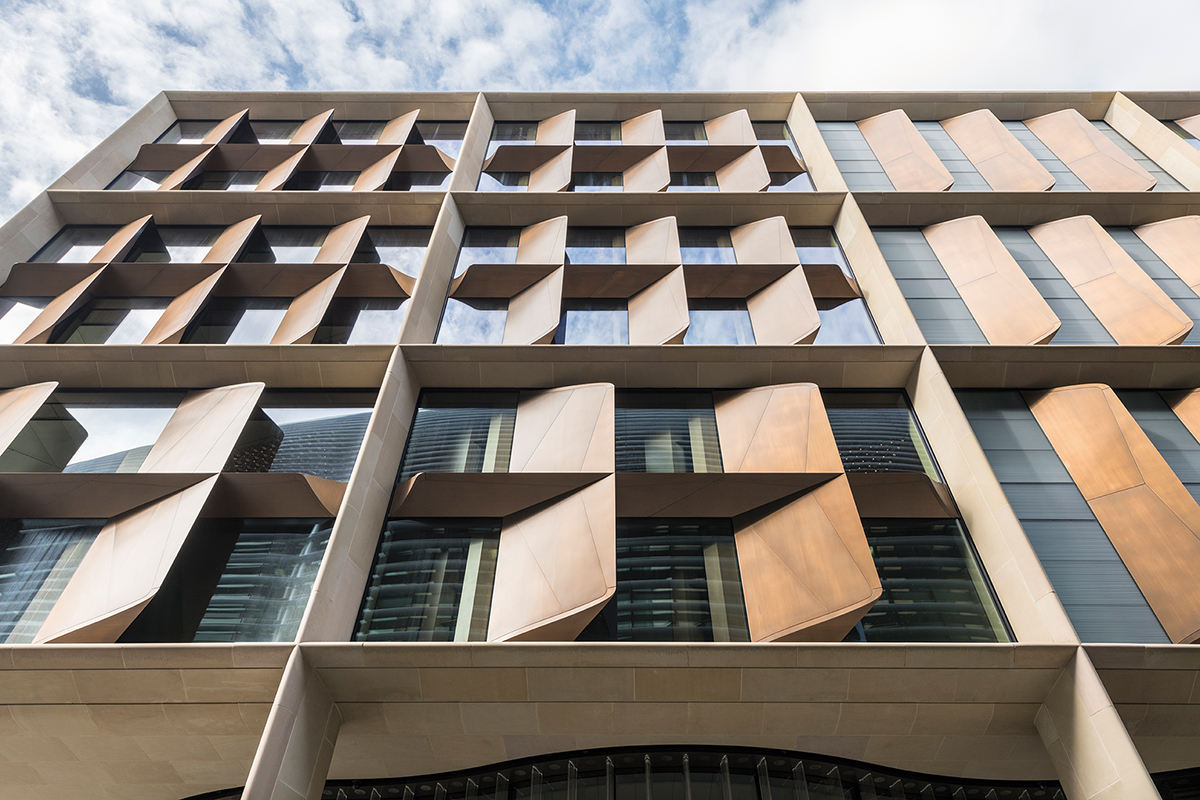 Upon crossing the entrance threshold, everyone must cross the hall before being sucked back into the Vortex, a decisively theatrical double-height space, created by three large wooden shells, inclined and curved in a sculptural contortion. 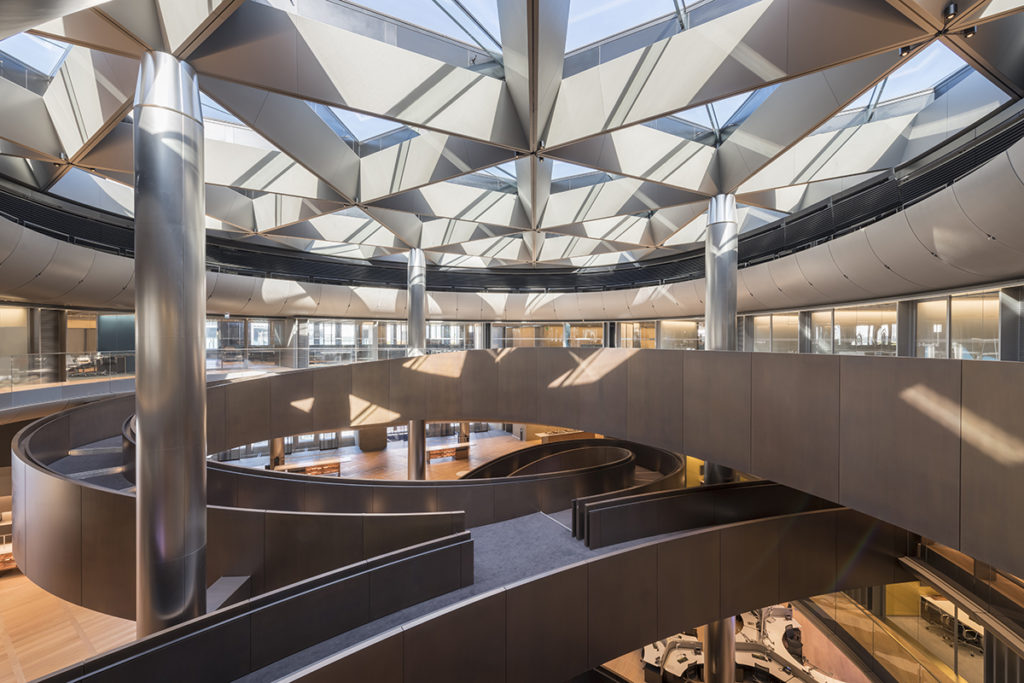 From here, lifts made entirely from glass lead directly up to the sixth floor, where the importance of collaboration and participation is expressed by means of open spaces, specifically designed to generate meetings and exchange. The concept of team is also effectively expressed by the system of desks and each floor’s layout, based on workstations for over 6 people arranged like alcoves to ensure privacy as well as collaborative work. Worthy of particular mention, the ceiling is truly unique and remarkable. Specially developed by means of polished aluminium panels in a petaloid arrangement, it has multiple functions: light refraction, acoustic attenuation, cooling, integrated energy saving system.

However the fact remains that the load-bearing column of the entire building is the audacious indoor hypotrochoid bronze-clad ramp which sprawls out into a triple helix for approximately 213 metres spanning 6 floors, equally conceived as a place of connection and fluid movement between people and ideas. Everything – the staircase, people, thoughts, is inundated with natural light from the vast glass and steel roof. A veritable masterpiece, in the words of Michael Bloomberg, a “social working space for a successful business”.

From wearable music to a sensor fountain: innovation on show at the Victoria&Albert Museum