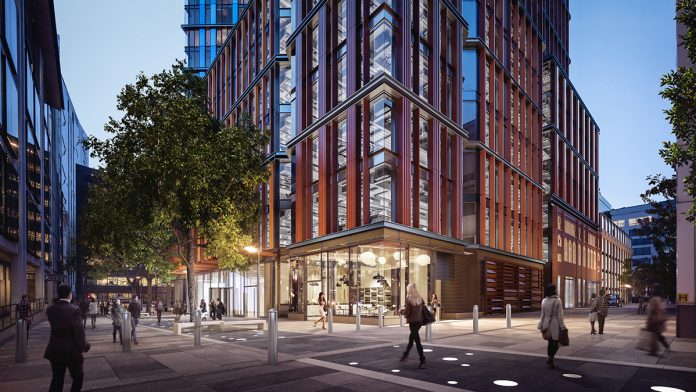 Come the middle of 2020, the Sun Street Conservation Area – in London’s South Shoreditch neighbourhood – will be dominated by the two towers of the multi-functional One Crown Place complex, courtesy of a £500 million investment from Malaysian group AlloyMTD. “The Sun Street Conservation Area was designated in 1987, and it occupies the southernmost part of the borough on the boundary with the City of London,” reads the Hackney Council website. “The conservation area is a mixture of remnants of early nineteenth century commercial and residential buildings, late nineteenth and early twentieth century industrial workshops and warehouses, and mid-late twentieth century office buildings. The buildings of principal interest include the Grade II listed Flying Horse pub, the Wilson Street Chapel and 5-15 Sun Street, a remnant of an early nineteenth century residential terrace.” When the complex – designed by KPF Kohn Pedersen Fox – is complete, this mix of old and new will be further augmented with the 21st-century influence of two residential towers standing at 29 and 33 stories each. Sleek and slender in their design and clad with terracotta, the prism-like towers will stand atop a six-storey podium home to the communal residents’ areas and office space. The rest of this “urban island” will make use of existing buildings hailing from a number of different eras, all of which have been renovated and equipped for a range of different uses. For example, a Victorian warehouse to the north of the complex has been turned into offices, while the Georgian Terrace on the south of the plot – a typical example of early 19th-century London architecture – will be transformed into a bespoke boutique hotel with 42 rooms, a restaurant and a clubhouse. Sale of some of the 246 planned properties began in March 2018, focusing on south-facing flats on four floors of the taller tower.

The interior design project has been entrusted to Bowler James Brindley, a London-based studio whose recent foundation belies the extensive experience of its three associates: Stephen Crawley, Ian Bayliss and Lucy Southall. For the “standard” one- and two-bedroom apartments, Bowler James Brindley opted for a contemporary, understated luxury style, supplemented with a few discreet nods to the complex’s architectural past in the form of materials and finishes. Herringbone parquet flooring in oak draws inspiration from the Georgian era, while ceramic tiles arranged in a brickwork pattern on the walls evoke the area’s industrial origins. There are graphite finishes to the metal frames of the glass doors, while the furniture clearly borrows from Shoreditch’s trademark warehouse style. On top of all that, the use of marble and bronze adds a final, classy flourish. The generous, open-plan living rooms with full-length windows allow the natural light to stream in, affording stunning views of the city. The kitchens – again with unbroken views of the urban surroundings – were made to measure by Bowler James Brindley in collaboration with Arcilinea, while designers from B&B Italia teamed up with the London-based team to produce the wardrobes in the bedrooms.

The new community of One Crown Place residents will – when they move in – also have access to several communal areas for group or individual activities, including a dining room, lounge area, small cinema, work spaces, a terrace and a gym. These have been curated by Sophie Ashby, a young interior design studio which has already produced an array of residential projects in London. The Sophie Ashby Collection also has nine exclusive three-bed residences up for grabs in One Crown Place, available in one-storey and split-level formats. The designer commissioned a range of high-aesthetic-impact pieces from artists and craftspeople for the residences, as part of a concerted effort to create personalised spaces brimming with creative energy.