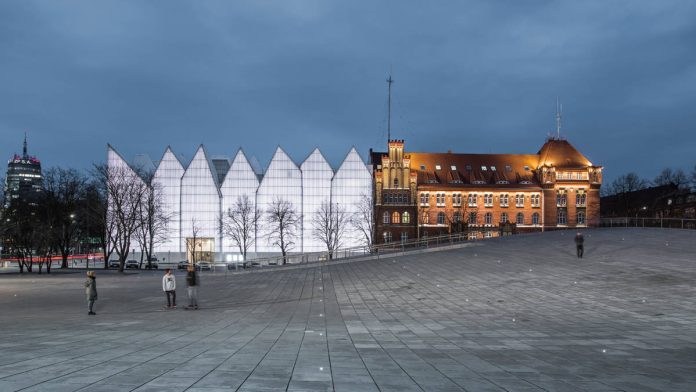 In attendance were 2500 people, including architects, designs and professionals, 411 finalist projects, 346 square metres of exhibition space, 100 international judges and 58 countries represented.  We could add other impressive numbers from WAF on the project categories presented or the workshops held or competitions staged. The event began in 2008 under the supervision of Paul Finch, inventor and curator of the Festival, which this year decided to tackle a topic of great importance in the seminars: “Housing for everyone’, an unavoidable issue given its topicality and the difficult situation of communities displace by wars or natural catastrophes. The INSIDE festival should not be overlooked. Running at the same time, it focuses on the world of interiors.

The jury named the winning project, in the World Building of the Year 2016 category, as the National Museum – Dialogue Centre Przelomy, in Szczecin, Poland, designed by Robert Konieczny/KWK Promes.  This is actually two projects, an underground museum and, above it, a large undulating square, on two levels with a stairway that cuts across the square and connects the two parts. On side of this space is framed by the Philharmonic, designed two years ago by Barozzi/Veiga. The idea is to guarantee the citizens, in addition to the museum, an open space for events, concerts or sports like skating, skateboarding or sledding, given the topography of the ground. The judges, headed by Sir David Chipperfield, declared: “This project enriches the city and the life of the city. It involves a site that has experienced three major historical episodes, First, before the Second World War, then it was destroyed during the war and, after the war, when a great void remained in the middle of the city.

In the Future Project of the Year 2016 category, which celebrates the best in world architect yet to be completed, the South Melbourne primary school, in a suburb of Melbourne, by the Hayball Studio. The project involved a school for 525 pupils, a new vertical model of school that meets the specific needs of the area, in a development zone called Fisherman’s Bend. The project is underway and will be completed in time for the academic year 2018.

Kopupaka Reserve won in the Landscape of the Year 2016 category. This is a park in Auckland, New Zealand, to a design by the Isthmus studio that imagines a hybrid oasis where the reserve of ran water is connected to an urban park, a game park and a skate park, all made possible thanks to a masterplan that envisages roads and green infrastructure over an area of 22 hectares.

The winner in the The Small Project of the Year section was ZCB Bamboo Pavilion designed by the Chinese University of Hong Kong School of Architecture. An innovative example of a public space, in the ZCB garden 4 storeys high, with a span of 37 metres and a surface area of 350 square metres for 200 people. It is made of 473 bamboo poles, which were bent on site to give shape a structure made with metal wire, as in the Cantonese artisan technique of hand-bound scaffolding.

INSIDE proclaimed Black Cant System the winner of the year 2016,  a fashion store of the Heike brand, designed by the AN Design studio, in Hangzhou, China.

There were many categories at WAF and numerous other prizes, including the International VELUX Awards and the Student Charrette Competition, not to mention the fourth edition of Architectural Photographer of the Year Award with Arcaid Images, which held its annual exhibition of architectural photographs, giving the award to Matt Emmett for the evocative image, Covered Reservoir in Finsbury Park, north of London.

The next edition of World Architecture Festival will be staged in Berlin from November 15-17, 2017.

Creative competition at Paris Déco Off