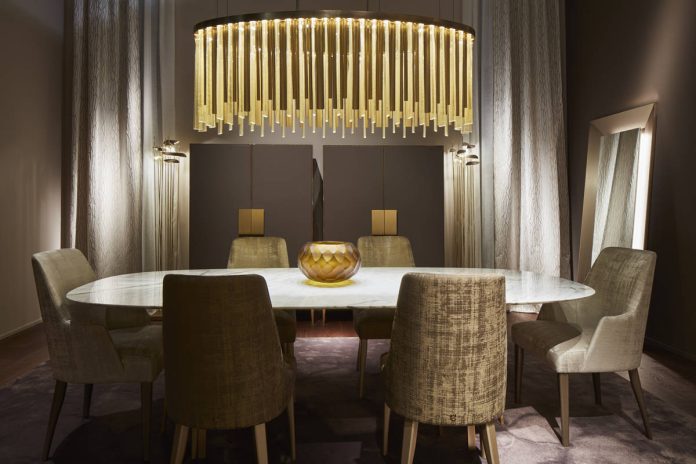 Paolo Castelli has actively participated on several fronts during the three days of the Shanghai fair, with the development of an articulated and increasingly international development path, starting from the Chinese market.
From last week’s participation in Salone del Mobile. Milan Shanghai, to the inauguration of a new flagship showroom in the city, on occasion of the fair. Both fair and exhibition showcases feature the Inspiration collection which recounts a “refined and eclectic” taste, developed from the evolution of exclusively Made in Italy design.

Inside the new store, on the fifth floor of the Ogloria Global Furnishing Exhibition Center, the collection develops in a labyrinth of living scenographies laden with époque grandeur, exalted by the evocative force of light. Living interiors Elegance and Lemma feature alongside dining areas dominated by the large tables For Hall Table Oval and Mars, masterfully completed by the celebratory power of the chandeliers Kalì, Venus Oval, Allure and My Lamp Suspension.

This inauguration comes after the recent Beijing opening, also in collaboration with Red Star Macallin, a leader in Chinese furniture retail and listed on the Hong Kong Stock Exchange. The city is the first destination for the company’s growth strategy. Stores are soon to open in Shenzhen and Kinming by the end of the year, for a total of 2018 inaugurations by the end of 2018, according to forecasts by Chinese partners and developers.

The 2015 “Das Haus” has been assigned to two Chinese architects