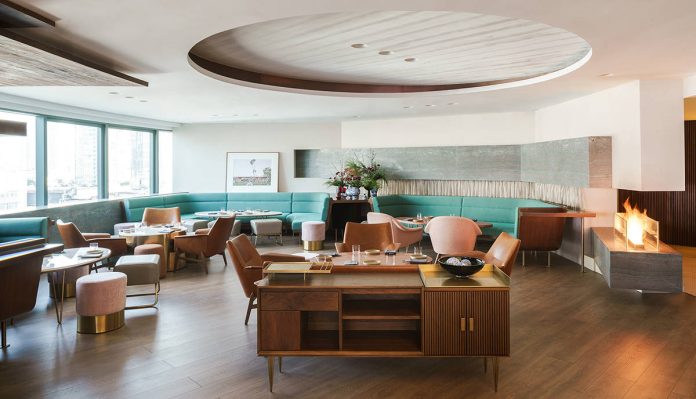 With the inauguration of five restaurants, 2016 was an intense year for Red Design on the Shanghai hospitality scene. Ostra, a bistro-style oyster bar, Mr Pancake House, an American diner, Silex, for chef Jerome Tauvron with a French-Japanese menu, the famous T8, redesigned on occasion of its move, after 15 years in business, to a more modern mall, and Highline, a ‘taste’ of supreme iconic Californian style, in Downtown Shanghai.
Commissioned by Le Baron and The Muse Group, the latter is located on the sixth floor of Ascott Serviced Apartments, with  views of the Xintiandi neighbourhood and Peoples Square. The décor and ambience at Highline are a tribute to the masters Frank Lloyd Wright and Eero Saarinen, as well as to mid-twentieth century American minimalist modernism.

The main purpose of the project was to confer value and attractiveness upon these scarcely illuminated, low-ceilinged premises, transforming them into a comfortable venue open to guests all day as a restaurant and lounge bar. This aim was achieved by exploiting the large balcony, both as a place of transition between the interior and the outside world and as a source of natural light. A glass structure expands the table area in a transparent skyroom, creating a visual connection with the urban panorama. Inside, artificial lighting has been resolved by carving large, rounded skylights into the ceiling, concealing numerous light points and cuts while leaving the milky white ceiling lamp spheres in full view.

In order to exalt work carried out on natural and artificial light, warm and pastel colours prevail in the palette of materials used for covers and furniture, with walnut and bronze. Rosé or sage green fabrics matched in interiors alternate with the lighter and reflective light grey tonalities of the balcony, translucent partitions and the white marble tops for tables near the balcony or full-length windows.