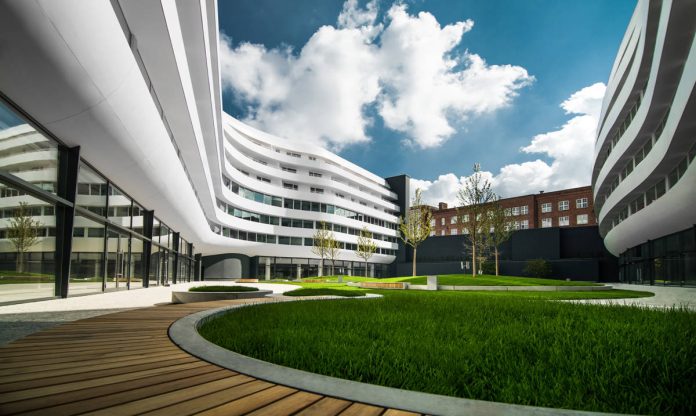 OVO Wroclaw is one of the newest buildings to spring up in the centre of the Polish city, having been completed last year by Gottesman-Szmelcman Architecture and JSK Architects on the huge site next to the Postscheckamt building, which was constructed by the Deutschen Reichspost [German Postal Service] between 1927 and 1929. The introduction of such a contemporary, multi-functional building has helped to breathe new life into the entire area, making it an important part of city life once again. Seen from above, the two imposing buildings seem to attract despite their contrasting shapes, materials and colours. While the Postscheckamt building is all clean lines and angular shaping, closed off to the outside world, the new complex has a more fluid, dynamic three-part structure, with soft edges and the internal and external facades designed to adapt to the various functions planned for by Wings Properties Sp. Z O.O: residences, offices, retail spaces, an internal public garden and the Double Tree by Hilton hotel with conference centre. The traditional, red-brick structure of the Postscheckamt is juxtaposed with the complex, continuous cladding in Glacier White Corian® that covers the entirety of OVO Wroclaw for a total of 6000m2.

Architect Asaf Gottesman explains that he “wanted a flexible material that could be thermoformed to create the double curves but that was strong and easy to maintain”. During the production phase, the Corian® panels were treated and later thermoformed to produce the desired shapes. Once cooled, the pieces underwent a final treatment phase before being finished using a 5D plotter. The same type of Corian® was used inside the building for furniture and signage, as well as to clad the large wall and ceiling surfaces in the hotel reception and meeting rooms. The brilliant white is contrasted by the warm colours of walnut, which is used in undulating stripes to emphasise and complete the curvature of the spaces.

San Pellegrino: the factory of the future