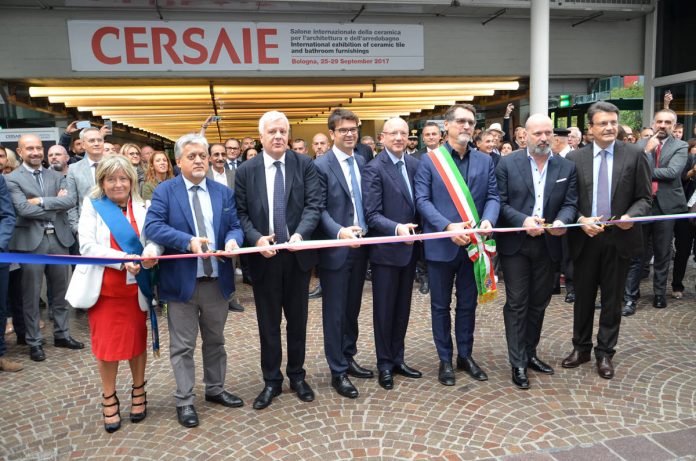 The ribbon has been cut at the 35th edition of Cersaie, the International exhibition of ceramic tile and bathroom furnishings. The Environment Minister Gian Luca Galletti, President of Confindustria Vincenzo Boccia and Stefano Bonaccini, President of the Emilia Romagna region, were all in the front line at the Bologna Trade Fair centre. The inauguration ceremony was followed by the opening convention “Sustainability and competitiveness of European manufacturing from an international perspective”, a tradition which precedes the official calendar of events, increasingly rich and specialised each year, with an array of cultural activities scheduled at the trade fair centre.
Already on its first day, the opening of the 2017 edition was truly impressive and heralded by a tangible dynamism. Hoards of visitors are flocking to the event which has also attracted an impressive 869 exhibitors from 41 countries, divided into six different trade sectors.
The event was already sold out four months before the opening date, a month earlier compared to 2016, due to areas dedicated to ceramics and other flooring materials, paint manufacturers and an outdoor area extended by 102% compared to last year’s edition, mostly achieved due to further optimisation of available spaces.

A dynamism which fully reflects the sector. Ceramics of Italy explains: “Major indicators confirm that the Italian ceramic tile industry has strengthened, indeed it has return to pre-crisis levels, despite international economics being weighed down by uncertainty. Production on national territory, with company and employee numbers stable, is on the rise for the third year running, and in 2016  a total of 415.9 million square metres were confirmed, an increase of over 20 million square metres (+5.4%) compared to the previous study. 2016 finished product sales amounted to 414.6 million square metres, an increase of over 15 million (+4.5%). Foreign activity constitutes the bulwark of this sector’s activities: total export quotas amount to approximately 85% of total profits”. Promising trends are also palpable in the Italian ceramic fixture sector, which achieved a 4.9% increase in total sales on 2016.

The trade fair is enriched by its extensive cultural programme “Costruire, abitare pensare” (Building, living, thinking), at its ninth edition, with meetings and conferences involving big names in architecture and contemporary design: Fabio Novembre with his “Lezione alla Rovescia”, followed by the Chilean architect Sebastián Irarrázaval and the Australian Sean Godsell; we also have the Spanish designer Elisa Valero Ramos and the founder of Kéré Architecture, Diébédo Francis Kéré.

Do not miss the Città della Posa installation in Area 49, with six work-in-progress pitches where master tile layers from Assoposa will demonstrate laying techniques and processes for ceramic materials, or the collective exhibition Milleluci – Italian Style Concept, at pavilion 30, an area which is also set to host the fourth edition of the ADI Ceramics&Bathroom Design Award.

Outdoor for all tastes

Los Angeles, the home of Dwell on Design