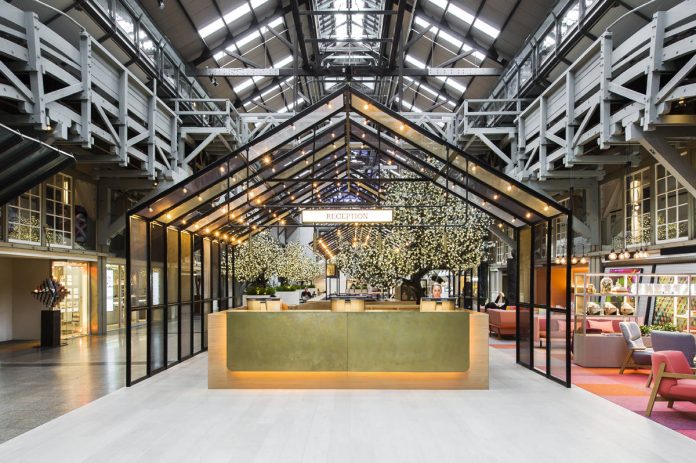 In Syndey’s Wolloomooloo Bay and the Finger Wharf marina, the landscape is inviting, to say the least. The quay, completed in 1913, is a unique example in Australia in technique and dimensions of engineering in water, built on wooden piles. Its 400-metre length (64 metres wide) is occupied by two parallel, shed-like buildings in the middle of which is a long covered illuminated path. A

fter around 70 years of commercial activity linked to the wool market, the entire structure, abandoned and fallen into disuse, was saved from demolition thanks to the opposition of local residents. Since then, the reconstruction and restoration embarked upon by the administration led to the creation of a “mixed-use” complex, with a promenade on the marina that has become very popular: residences in the north end, stores and restaurants in the central sections and a hotel in the southern tip, overlooking the water.
A perfect choice of both position and context for the third address in Australia, following 1888 Darling Harbour in Sydney and Laneways in Melbourne, for Ovolo Hotels, an independent hotel chain founded in Hong Kong in 2002 by Girish Jhunjhnuwala, who commissioned the international Hassel studio to revolutionise the spaces previously occupied by a Blue Hotel.

A location filled with history, evocation and potential that represented a remarkable challenge for the designers, not only in abiding by the constraints imposed by a building protected by the Office of Environment and Heritage but also, and above all, in bringing the immenseness of the forms and volumes to an architectural and functional dimension in a human scale. “The hotel enjoys brilliant natural light, a view of the port and a cosmopolitan atmosphere, making the historic quay a place that can be experienced and appreciated. But to infuse the structure with vitality,” the architects explained, “we first had to transform the vast, uninviting tunnel, the spine at the centre of the existing space.”
The breadth and mechanics of the tunnel remain visible, with the load-bearing frame, the cover, the many beams, the skylights, the metal plates of the 5 interior levels arranged on the perimeter, skilfully resized and ‘shrunk’.
First seen from the stairwells at the entrance, then from the self-supporting double-pitched pavilions, furnished and fitted out differently to arrange the numerous public spaces in sequence, many of which are multifunctional: the lobby, the ‘Lo’ lounge, the long bar counter, the billiards room, the restaurant, the private dining room, the areas for working, all accessible on a human, sociable scale, gently illuminated by trees in pots bearing lights. The variety of the finishes that differentiate the interior structures, walls and floors of the various areas is matched in the many features of the furniture of different types, materials and colours in a collection – with a colour palette that lacks for nothing – that is as (un)coordinated as it is vital, energizing and, why not, brazen.

In brief, colours, furnishing and people at liberty, like the geometric multicolour décor of the walls, vaguely futuristic, which surprise guests making their way to their rooms.
There are a hundred rooms and suites, spacious with a less flamboyant atmosphere, even if a little theatrical and ironic: starting with names like Superoo, Deluxaroo, Cityvoo in the King, Double Double and Loft with mezzanine versions, and the Ultraroo suite, which all have pop-art furnishings and decorations, eclectic themed bedheads and works of art. And those with the soul of a rock star can book the INXS suite, with well-stocked bar, vinyl record players, once again back in production, vintage Playboy magazine in the two bathrooms and a lounge area, obviously suitable for an afterparty. And on awakening, you can enjoy a restorative fitness session in the swimming pool or gym.

Ville Venete and the Outdoor

The goblets of Andrea Mancuso for Perrier-Jouët

Rossana Orlandi: “Refuse has value. Let’s save it.”