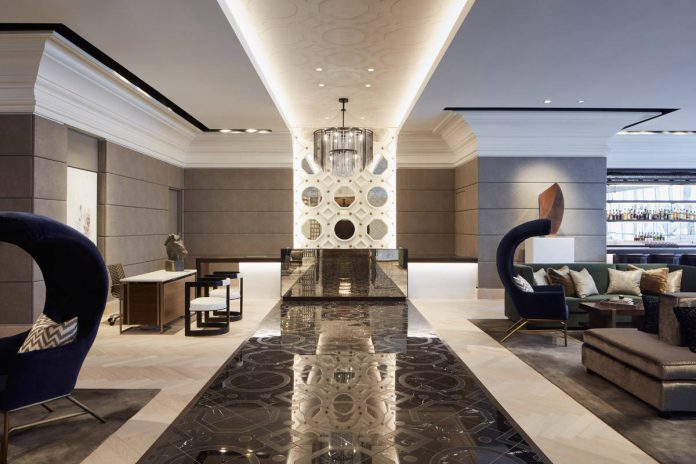 Crossing the threshold of LondonHouse is like travelling back into the history of the city. The place transports you back to 1920s Chicago – it’s heady, entrepreneurial spirit, its artistic soul, its architecture and music.  Step inside and what awaits you is a taste of that thriving past brought up to date with a contemporary flourish.

Situated at the intersection between Michigan Avenue and Wacker Drive in downtown Chicago, LondonHouse looks out over the Chicago River from a building dating back to 1923. Originally designed by Alfred Alschuler for the London Guarantee & Accident Company, the “adaptive reuse” project that would transform the building into a hotel was handed to Goettsch Partners. With the building having been renovated as office spaces over ten years ago, the Chicago-based Goettsch Partners decided to inject a hit of real modernity by incorporating a new silver tower to the west to serve as a combined 452-key hotel. The renovation encompasses 305,000 square feet of the existing 21-story building, with an expansion of 85,000 square feet next door.

«The new glass tower is designed to complement the historic building by respecting the cornice lines of the existing property. At the same time, an aesthetic more suited to present day provides a clear delineation of old and new, and clearly sets the new tower apart as a building of its own time – explain Goettsch Partners – A subtle series of sawtooth angles in the new façade responds to the signature views west down Wacker Drive and the Chicago River».

From here, guests can access the hotel itself via the main entrance and a gateway arrival lobby leading to the grand second-floor check-in lobby and bar. The tower, which is aligned floor-for-floor with the pre-existing structure, provided the extra space necessary for a ground-floor restaurant, second-floor reception and bar, a third-floor ballroom, and additional guestrooms, meeting spaces and an outdoor terrace on the upper floors.

This desire to respect the past of the building itself and of the local area as a whole – themes which became sources of inspiration for the designers – can also be seen in the interior design project by the Simeone Deary Design Group.

The era of the Industrial Revolution is invoked by the delicate yet majestic metal chandelier that lits the entry, a study in contrast, adorned by nero and ivory stone in polished and honed finishes, architecturally punctuated by a black-and-white oval stairway. «The mezzanine lobby honors the history of the heroic feats at the battle Fort Dearborn (which took place in the exact same place the building is now located). Accents of tailored uniform details mirrored with layers of American Indian inspired patterns are subtle nods to the landmarked site and served as inspiration for the architectural and furniture embellishing.  Guest’s journey from lift-landing to mirrored-front-desk across a black marbled walkway stretches a two-story space amongst enormous chandeliers, troweled-plaster walls, bedecked-metal columns and glossy-coffered ceiling – all details lifted and modernized from the original historic structure».

Defining the entire building and dominating the beautiful Chicago skyline is the rooftop, which has been transformed into a three-level terrace and bar, culminating with a stunning dome.