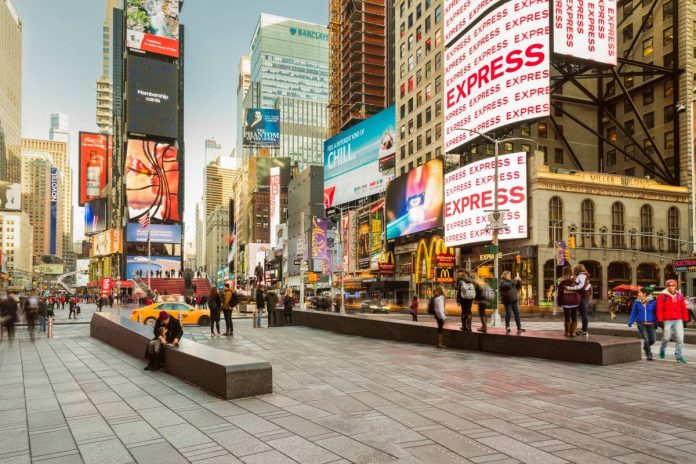 Craig Dykers, partner and founder of Snøhetta, explains how the idea for the project came about by answering the question “What is the most important thing in Times Square?”. The answer is people. With this in mind, the architects have explored different aspects, studing the flow of people, the light and the way in which Times Square is occupied by 45 million visitors every year. After Broadway was closed off to car traffic in 2009, the architectural firm released the square from all its old infrastructure to create a pedestrian area. Ten large granite benches were added: 50 feet long (around 15 m) in 5 different types to allow pedestrians to easily move around the area and to sit down at their leisure. The designers explain that the completion of the project in 2016 not only improved the most famous square in the world from an aesthetic point of view, but also added physical, economic and psychological advantages.

The pavement, which is customized with two different shades, has been inserted with nickel steel disks that capture the sunlight and the glow of the neon lights, reflecting them in truly striking ways. The ten granite blocks, which are aranged along Broadway’s axis, define and frame the square’s space, organizing the flow of people and allowing groups to stop in gathering spaces without getting in the way of hurrying pedestrians.

The site of the project, known as the “Bowtie” due to its shape, has become the centre of numerous public, cultural and sports events, such as yoga lessons during the summer solstice.

The sky above us

Vondom: new dimensions for the outdoor