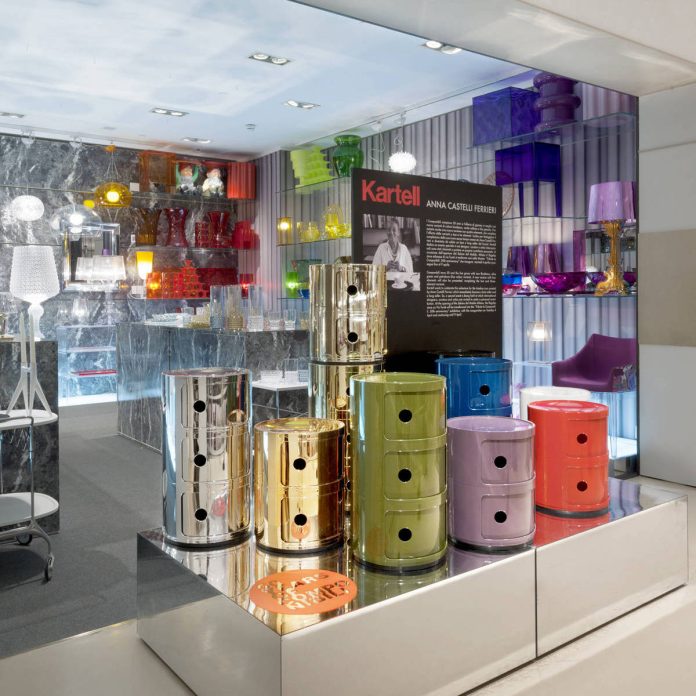 Some people focused on colors, Mario Bellini transformed the Componibili into Campbell’s soup cans, Ferruccio Laviani turned them into a flower box, Piero Lissoni imitated his favorite 20th century maestro, Jackson Pollock, Nendo imagined an entire ‘Componibili’ family made up of cups, books, glasses, lamps and leaves and Patricia Urquiola filled these design icons with so many thoughts and memories that they can no longer be closed.

These were just some of the contributions from designers, curators, critics and intellectuals that were asked by Kartell to celebrate 50 years of the Componibili.

But what was the origin of these design icons? They were based on a brilliant idea by Anna Castelli Ferrieri, Art Director of Kartell from 1976 to 1987.

The 4970/84 containers were the first modular, assemblable complements made with ABS, a new material at the time, which has very innovative mechanical and aesthetic features.

The exhibition, which was first presented during the Salone del Mobile, is designed to be transportable and will be open to the public at the Kartell Flagship Store in New York, from 23 to 28 May, at 39 Green Street, in SoHo.

From Madison Ave, across the States