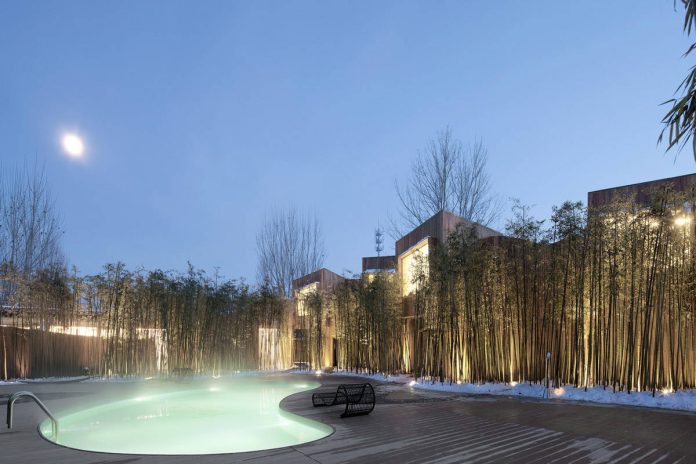 WHY hotel, in the north eastern outskirts of Beijing, was originally a themed holiday farm, dedicated to comics. After its conversion by Wei Architects/Elevation Workshop, completed in October 2015, the holiday farm became a design hotel with completely restyled features, spaces and dimensions, and above all with a new spirit, in harmony with a small bamboo forest, a thermal spring and the mist.

There are over twenty rooms housed in the existing structure – three sections on one floor joined to an open square – which have been renovated with bespoke décor, while seven new mini suites have been added in an arrangement of small spaces that now enclose the perimeter. Instead of the single body envisaged in the initial idea, the architects opted for a highly-resistant steel bamboo structure (an innovative material that combines bamboo fibre and phenolic resin) and a variable, fragmented shape that gives the hotel a striking appearance, while also serving the functional needs of the architectural project.

To better fit the small size of the site, the seven rooms have become single units on two levels arranged in an irregular order, apparently ‘randomly’, which maintain their individual privacy despite their close proximity and ensure optimal exposure and all required functions in a small space: in addition to a bed and private bathroom, they are also equipped with a small outdoor hot tub and a meditation area.

To give the surrounding natural setting greater prominence, the rooms have an elevated position, distinctly geometric forms and a few basic furnishings, with a prevalence of wooden elements, which recall the external bamboo structure, and neutral colours. The exterior and the bamboo forest also have a strong visual relationship, aided by large glazed windows and doors, which also function as a darkening curtain thanks to the use of electronic dimmable glass.

Beyond the windows, your gaze rests on the green, undulating double curtain created by a wooden fence and bamboo trees, though which you can glimpse the hotel’s main shared space, with its bean-shaped swimming pool of hot spring water and central courtyard suffused with a light mist of steam.