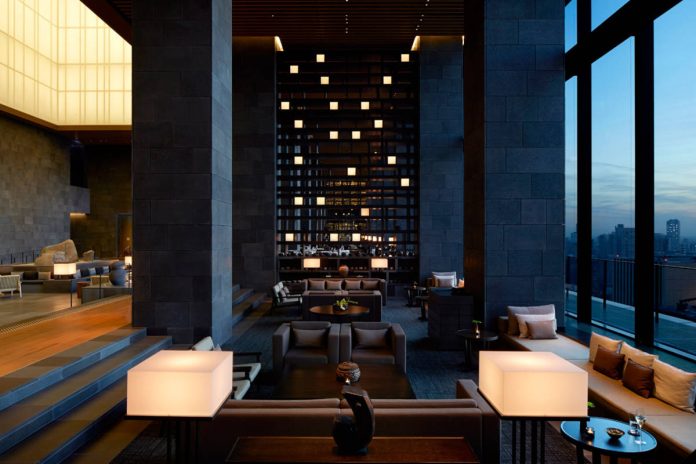 Aman Tokyo is the 27th hotel opened by the Singapore-based chain and the sixth designed by Australian company Kerry Hill Architects. And though it is the first Aman to open in an urban area, it refuses to compromise on the kind of panoramic views that have become so synonymous with the international hotel chain. Aman Tokyo occupies the top six floors of the Otemachi Tower, designed by American architectural studio KPF Kohn Pedersen Fox and completed recently in the Tokyo financial district.

The 38-storey tower juts up from Tokyo Station, the central hub from which five underground lines snake out, near to the public Otemachi no mori park, and offers guests stunning views of the Imperial Palace and its gardens. Made from glass and aluminium, the shell of the structure allows for large internal spaces with incredibly high ceilings, while full-length glass windows allow the infinite shades of natural light to penetrate and create a backdrop of brilliant sky and urban buzz.

The sense of height becomes almost dizzying in the lobby, which is accessed via street-level lifts. It is an immense void, 30 metres tall with a floorplan of 40 by 11, cutting through the centre of the hotel’s six floors, 33 to 38. The architects have designed the space to resemble the inside of a gigantic lantern, using translucent washi paper panels to cover a traditional Shoji wood structure. This lantern – a nod to Japanese culture – allows sunlight through, lighting up the space below, where more Japanese influences reveal themselves: an internal garden is surrounded by various seating areas, extending out from a central water feature adorned with ikebana flower arrangements. On one side sits a long, wooden podium, a take on the engawa, which traditionally represents the border between inside and out.

The transition from the lobby to the other communal areas of the 33rd floor is fluid, leading guests to The Restaurant by Aman, The Lounge by Aman, The Cigar, a library stocked with books on Japanese culture and several meeting rooms. Up on the 34th floor, guests can enjoy the spa, fitness area, private dining rooms and a pool overlooking the city.

The choice of materials plays a key role in the successful fusion of the traditional and the contemporary which characterises the entire interior design project. In addition to washi paper and camphor wood, basalt is used in the huge communal spaces as cladding for walls, columns and flooring. Basalt’s iridescent coloration and tonality come into their own here, varying between grey and blue under the changing light, complementing the fabric chairs and sofas. The private areas occupy the rest of the floors, leading to the summit of the Otemachi Tower. There are 84 rooms and suites of various types, from the 71sq m Deluxe – certainly a generous size for a standard room – to a range of suites of around 150sq m, all with panoramic views of the city and Mount Fuji rising in the distance.

The influence of the traditional Japanese home becomes more apparent here, both in the layout of the spaces and in the choice of furniture, materials and colours. Top-quality local woods are the predominant material in the rooms, their neutral tones perfect for the simple, understated furniture as well as the walls and flooring. The internal spaces in the rooms are divided up by raised partitions, with sliding Shoji panels transforming the space when opened or closed. Grey basalt makes a reappearance, creating a material and colour contrast with wood in the large bathrooms, where the traditional furo bathtub instantly catches the eye. It is a classy homage to the Japanese bathing ritual, which guests can observe with the lights of Tokyo all around them.