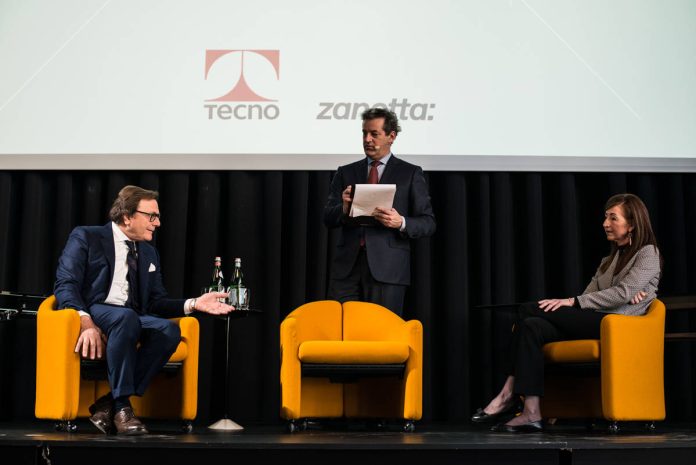 A merger of two genres, the work place and home living, defines the latest new acquisition to reinvigorate the Made in Italy furniture panorama.  Techo has acquired the majority shareholding in Zanotta, equal to 80%.
An operation – officially presented on Tuesday in the premises of the Fondazione Feltrinelli – that will enable the two brands to more easily break into the world of design and all round hospitality by making use of their reciprocal design expertise.

“It was more of a business operation than a financial one,” according to the two central figures in the deal, Giuliano Mosconi, Chairman and CEO of Tecno, and Eleonora Zanotta, President of Zanotta, where “the presence of the family is fundamental”, as it was for Tecno when Mosconi took over the majority shareholding in 2010 from the Borsani family, still involved in the company.

“An aspect of madness and romanticism with regard to a business like many in Italy that has maintained a significant spirit” drove Mosconi to make this investment, which can guarantee Zanotta growth in the markets thanks to the strong international presence of Tecno, which has six branches abroad that “from now on will also be Zanotta’s”.

The numbers are on their side: In the last five years, Tecno has achieved constant growth and ended 2016 with a turnover of 32 million euros, 30% up on 2015. Zanotta becomes part of the new group with revenues of 60 million euros in 2017 and future growth forecasts of 20% a year.

The identities of the two companies will be clearly separate, while the product complementarity will be a big plus in the design sphere; the respective sales networks will similarly be separate.
“It is necessary now to work on the sales force,” concluded Mosconi, “and reassure our clients that this is solely an operation of growth, in which the soul of the two companies shall not be tarnished.”

Top Employers 2022: also in the world of design

To the Covid-19 Task Force: “Back to production by 20 April”