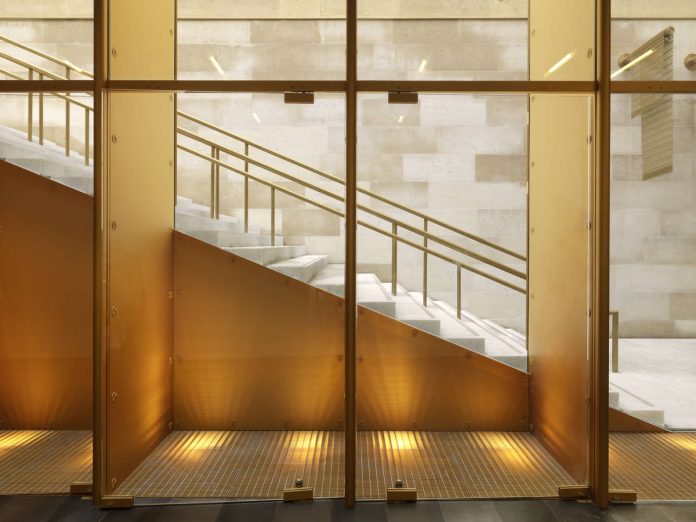 The Pavillon Dufour, the new visitors’ entrance at the Palace of Versailles, was reopened on 23 February 2016 having been completely refurbished and redesigned by Dominique Perrault Architecte, who struck the perfect balance between restoration, refunctionalisation and new features. In order to give the Palace more space for registering and welcoming visitors (there were 7.5 million in 2015 alone) and to modernise the museum experience, in 2011 the Opérateur du Patrimoine et des Projets Immobiliers de la Culture ran an invite-only design contest which eventually led to the establishment of a plan for the regeneration and streamlining of the two wings around the Cour Royal. These serve as the public’s entrance point to the Palace, the Pavillon Gabriel and the Pavillon Dufour. Perrault – working in collaboration with Frédéric Didier, an architect specialising in historic monuments and the man responsible for the restoration project – redesigned the entire initial entrance route, bringing all services for individual visitors together (groups still enter via the Pavillon Gabriel) and preserving the original volumes, proportions and dimensions of a building designed in 1770 and constructed between 1814 and 1817. “Beneath an apparently immobile sense of symmetry, something synonymous with classicist architecture where nothing seems to change, here – in fact – everything changes.” It is a restoration project that seems to have taken place “under the skin”, almost invisible from the outside. The main work took place in the basement and attic, allowing Perrault to create renovated, modern and functional spaces in an efficient, long-lasting way. On the same level as the internal courtyards, the Cour Royal and the Cour de Princes, the ground-floor entrance in the Galerie de Lustres instantly gives visitors a taste of the Palace’s magnificence and grandness with a contemporary makeover based around three main areas: flooring, lighting and ceilings, from the parquet-style floor in metal, all dark and gold, to the rolling curves of decorative “banners” in wire mesh on the ceilings via shimmering chandeliers. Metal is a key theme throughout the interior design project, which was coordinated by Gaëlle Lauriot-Prévost. Gold also features heavily, a symbol of royalty. Indeed, gold-plated metal is used for the structure of the glass prism which provides a glimpse of the basement, flooding it with light and drawing the eye to the brand-new Perrault staircase. This leads you to the exit and service areas such as the bathrooms and cloakroom, as well as to the store, which is located in the old cisterns and features stunning vaulted ceilings. Completing the project are a restaurant on the second floor – Ore – Ducasse au Château de Versailles, due to open in September 2016 – and a 150-seater auditorium in the attic with mansard roof.

Duka for Cave Bianche: wellness in the Nature