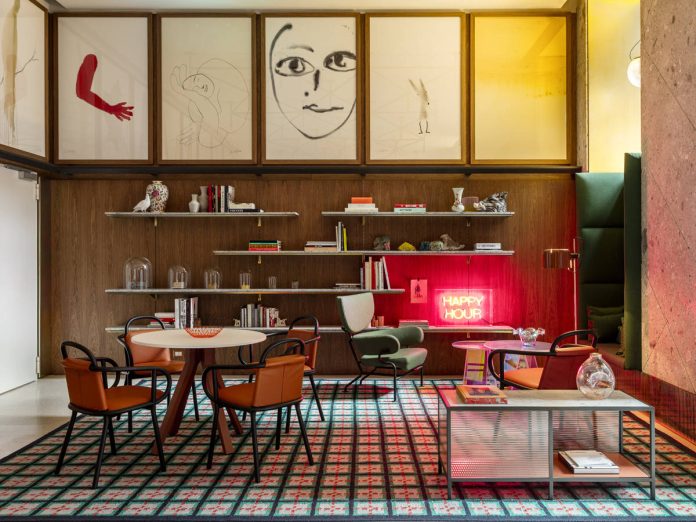 The philosophy of the Room Mate chain, which has opened 27 hotels since it began in 2005, is to welcome its guests as though opening the doors of its home to “travellers coming to the city in search of comfort, warmth and hospitality” and to treat them as roommates.

After New York, Miami, Mexico City, Florence, Madrid, Barcelona, Malaga, Oviedo, Granada, Salamanca, Amsterdam and Istanbul, the third Italian address after the two in Florence was opened in Milan in March 2016, in a nineteenth century building in the central Via Silvio Pellico. In addition to its desirable location in the heart of the city, Room Mate offers, as its president Kike Sarasola explains, “large beds, the option to have breakfast until midday and the convenience of unlimited internet throughout the city”, as well as sophisticated designer décor for the interiors and an original reinterpretation of the genius loci of the host city.

Patricia Urquiola has interpreted the spirit of Milan for this latest Room Mate, drawing on and reworking certain peculiar characteristics of the city’s culture and architecture: the twentieth century design, functional rationalism of home interiors, elegant eclecticism, graphic arts, materials such as marble, brick, brushed metal and the warm, but tempered tones of green, blue, orange, red and gray.
Featuring décor with remarkable attention to detail and unusual combinations, the 85 rooms and communal spaces, with a lobby and restaurant on two floors, are also a tribute to the international history of design with furnishings by Moroso, Glas Italia, Kettal, B&B Italia, Kartell, Oluce and Cassina, whose Contract Division oversaw the entire project, creating a tailored reception desk and library in the lobby, as well as tables, desks, bathroom furniture, mirrors, curtains, beds with upholstered headboards and adjustable brass lamps.
he unusual cabinets have a minimalist aesthetic inspired by the concept of industrial shelving for both the designs and materials used. The structure, enclosed by curtains and complete with drawers, is made from tropicalized metal, produced with an environmentally friendly galvanic zinc coating that confers resistance and a rainbow-colored fluorescent shade. The surfaces of the rooms for guests become textured and three-dimensional thanks to colored paneling and a geometric grid decoration on a white background, which gives a three-dimensional effect to the walls and ceilings. Throughout the hotel, there are works by Milanese artists, photographers and illustrators.

Molteni Group on show on Madison