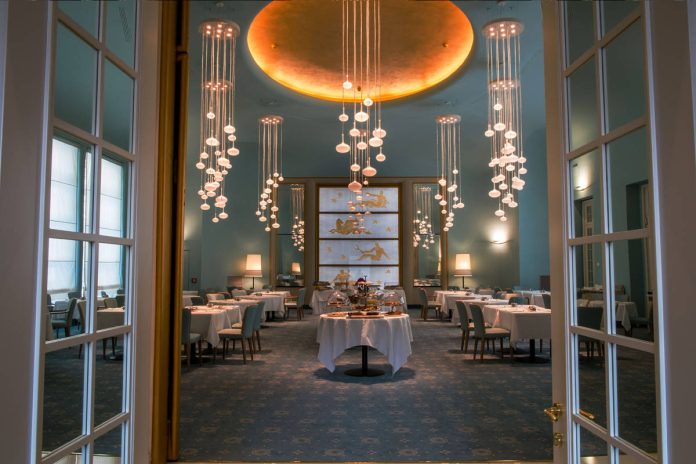 “It was necessary to create two lighting installations that were particularly striking, spectacular and decorative for the hotel’s common areas: the stylish Lounge and the Sala Mollino, one of the hotel’s historic rooms,” explains Massimo Crema, founder and designer alongside Ermanno Rocchi of Melogranoblu.

Built in 1872 and closed in 2007, the hotel reopened in May 2015, preserving the charm and atmosphere that have always distinguished it. The 4-star Turin Palace Hotel is spread over six floors, with a classic layout and 126 bedrooms plus a presidential suite.
The majestic original rooms, such as the spacious stately hall, the large living room, the ballroom and the restaurant have been maintained, respecting their original art deco style, but introducing technological and performance standards that are essential for the modern day.

With regard to the lighting, Crema illustrates the designs of the two rooms: “The products used for both rooms are part of the Hydra collection. The blown-glass forms, suspended by colored metal tubular mesh threads, reflect the light of the room, creating evocative scenes. The type of lighting that we designed for the Lounge is a truly artistic installation made from transparent glass, which allows you to enjoy the relaxing atmosphere of the rooms. For the Sala Mollino, we instead recreated the original atmosphere of the ballroom, taking inspiration from its marvellous dome, which boasts a very unusual turquoise color. We used the white satin glass Hydra ceiling lights, specially transformed for the hotel into eight chandeliers hanging from the ceiling.”

All the installations are perfectly integrated in their environment, enhancing it and highlighting the colors of the rooms, thanks to the contrast between pure, bright glass and the elegant, historical setting of the Turin Palace Hotel.

The green soul of luxury