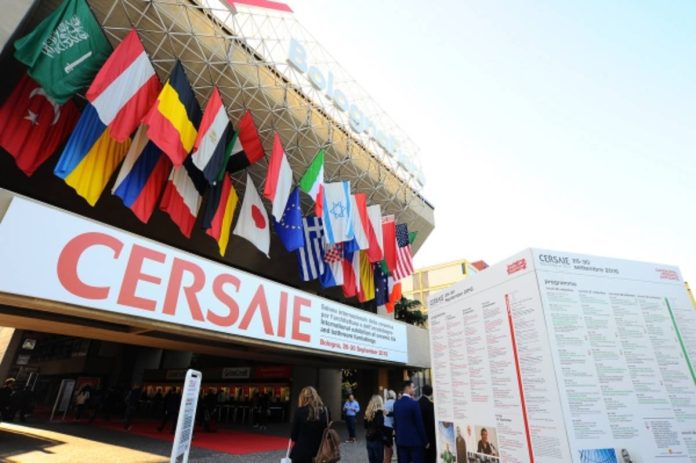 In short, Cersaie lives up to expectations yet again this year. Opened on Monday, it will enliven the Bologna fair district until Friday 30 September. In addition to the exhibition side, which puts the fair among the leaders – in the bathroom furniture and ceramics industry – on the European scene, Cersaie is also accompanied by a series of side events that offer significant cultural and business insights. Starting with the opening conference, Fair Trade e competitività della manifattura italiana nel mercato globale (Fair Trade and the competitiveness of Italian manufacturing in the global market), followed (on Tuesday) by the keynote lecture by architect and designer Norman Foster, entitled 10 on 10: Ten Fosters and Ten others.

Another major industry name that stands out on the program is Manuel Aires Mateus, founder of the architectural firm of the same name in Lisbon, the star of the conference dedicated to him, L’architettura di Aires Mateus (The Architecture of Aires Mateus): “architecture, unlike fashion, is an art that endures over time and is characterized by its durability. In short, it is the art of permanence. It not only needs to endure from a physical point of view, but also from a conceptual point of view, which is yet another “time”: the endurance of an idea is longer than physical endurance». This is his philosophy, which is concretely expressed by projects such as the EDP headquarters in Lisbon and the Lighthouse Museum at the Santa Marta beach in Cascais.

Thursday is the day of the Forum: Italia.Architetti4.0, a conversation with multiple participants dedicated to the architectural profession among the younger generations.

This year, these events will also be accompanied by conversations about design organized at the three new Press Cafés, located in different pavilions.

Meanwhile, the Cersaie “design your home” initiative is dedicated entirely to consumers: on Thursday and Friday, general visitors can meet architects to get advice about flooring and coatings to decorate their homes.

Marazzi arrives in London with a big puzzle