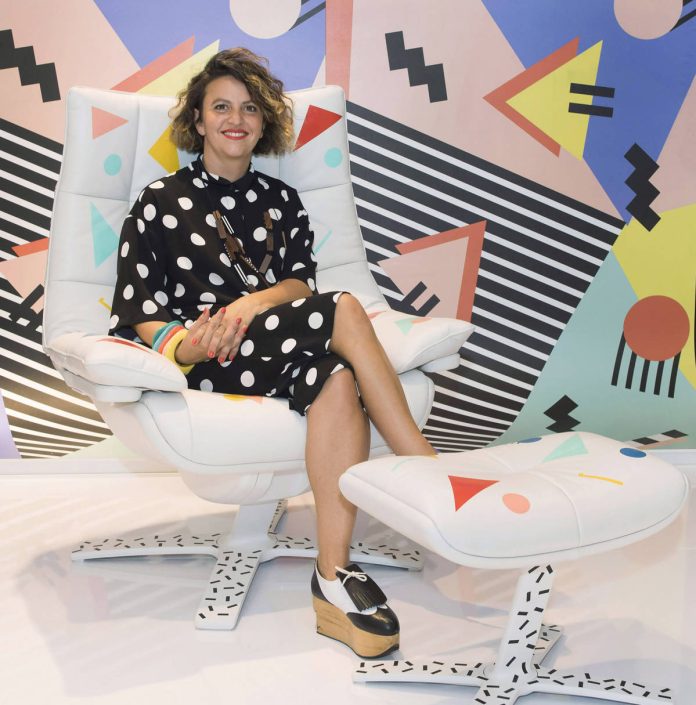 Only the creative at its best can boldly strut on the London catwalks. And Natuzzi, thanks to the Re-thinking Re-vive project, offers an incomparable exhibition with the iconic Re-vive armchair, the absolute protagonist of the London Design scene and the flaghship store Natuzzi Italia in Tottenham Court Road.

Eley Kishimoto, Patternity and Camille Walala have been working over the summer to create distinctive interpretations of Re-vive; each designer was invited to create two customised recliners by working directly onto the white quilted leather cover using paint, vinyl, applied materials, spray or whichever media they felt appropriate. Whilst one recliner is displayed in the main store window throughout the London Design Festival week, the other has been specifically conceived as a ‘live chair’, devised for an exclusive launch event on September 19th.

All three designers have drawn inspiration from Natuzzi’s key brand concept of harmonious living and its core symbols, which include natural and traditional elements found in their native region of Apulia: sun, olive trees and leaves, hand-crafted lace and Classical decorative architectural motifs. Another reference point is the design of Re-vive itself, which reclines without a lever mechanism by responding to the weight of the body.

Three customised Re-vive chairs are also on sale throughout the festival in aid of the families hit by the earthquake that has recently struck southern Italy. The proceeds from the sales will be donated to charity.

Pasquale Junior Natuzzi, Communication and Deputy Creative Director of Natuzzi says: “We are proud to be participating in The London Design Festival with this collaboration, which involves some of the best creative minds currently working in the UK. At Natuzzi we are always open to broaden our horizons, embrace artists’ influences and think about design as a key source for our identity. Re-thinking Re-vive I feel is a combination of all these ingredients and is a great example of our positive attitude”.