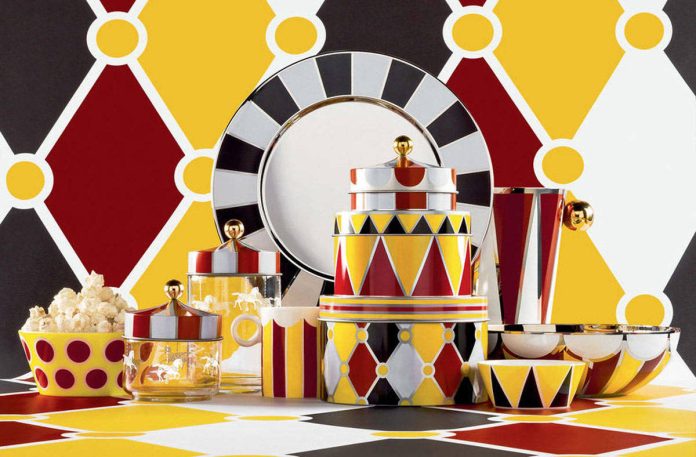 «The circus is that sensory experience that never leaves you. It’s magical. It’s mystical. It’s larger that life. That’s what we capture in this collection». Marcel Wanders’ words enlighten the new Circus line, conceived in collaboration with Alessi and presented at Maison&Objet Paris. A partnership that brings to the deepest roots of the company the innovative and creative Wanders’ approach.

Alessi Circus is a series of home accessories that astonishes exactly like a circus show, thanks to its colorful, lively and eclectic tone. It’s composed of 29 products for the catalogue besides five, limited-edition pieces for Officina Alessi that aim to become icon. 999 numbered works with nine artist’s proof: the Officina’s five are circus performers with their own story to tell and a specific purpose.

Let’s give voice to The Strongman (Marcello), a muscleman who steals hearts and enjoys living up to his name as the one and only – Mr Nutcracker! Using Strongman is child’s play. The base contains a hollow to place the nut in. By turning the weights, the slider moves and the laced high-boots come down to break the outer shell. To bring the slider up again easily and remove the cracked nut, simply turn the balance anti-clockwise.
Valentina, The Ballerina is one of Marcello’s companion; a graceful baby elephant who spins upon a gilded ball, performing classical dance steps in the company of a little mouse. two romantic characters to life in a poetical musical box. The pedestal on which she performs her dance contains a mechanism that plays the tune: The March of the Gladiators by Julius Fučík, a melody that opens circus shows all over the world.
A bizarre corkscrew but also a piebald costumed saltimbanco, The Jester (Gilberto), followed by Alberto, The Candyman, a clown who wears a top hat that offers goodies.
Finally, its turn of The Ringleader. The name is Massimo, the function is a dinner bell. Wanders narrates that he is a slightly crazy circus master who thinks he’s still running the show, whereas he really spends his days, from one bell-ringing to the next, being led around by his monkey.

«The accesories are wildly engaging and festive – Gabriele Chiave, Creative Director of the Marcel Wanders Studio confirms – Our collection is unequivocally designed to bring smiles and delight».

The enchanting museum-space in Rotterdam