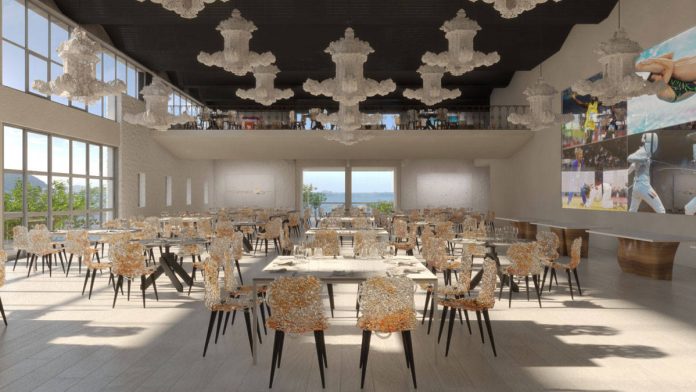 Not far from the frenetic centre of Rio de Janeiro, the iconic Costa Brava Club will make its breathtaking panorama available to the “Blues” during the 2016 Olympics. Not just any old residence, Casa Italia is the exclusive location that will host the sporting champions. From Edra to Ethimo, from Slamp to .exnovo, from Gufram to Kartell, these are just some of the names that contributed to the implementation of the project in the Carioca area. As well as the utmost comfort, a firm emphasis on the Made in Italy brand was a prerogative for the Official Suppliers selected by Claudia Pignatale, who was in charge of the interior decoration.

The Club lies in the western quarter of the city, between Barra da Tijuca and Sao Conrado, and was designed in the sixties by Ricardo Menescal in the form of a small island, connected to the mainland only by a 98-metre bridge and fitted out for the occasion with a lighting strip made by ILM-Lighting.  The Casa, jutting out into the ocean, is an appropriate location to showcase Italian savour faire and follows the pattern set by Horizontal.  This is a format suitable for displaying, without any rigid hierarchy, works of art and design pieces that reveal the links between the Bel Paese and Brazil. The building – where the Committee for Rome 2024 will also be housed – is to be inaugurated on August 3.

The integration between the two nations is eloquently expressed by numerous articles of Edra furniture of the calibre of Brasilia and Favela (both designed by the Fratelli Campana). Respectively evoking the capital and the shanty towns of the South American country, the first is a table made of shards of mirror, the second is a wooden seat with a structure similar to the buildings of the favela. The brand also includes the upholstery On The Rocks, Sfatto and Standard – all completely modular and designed by Francesco Binfarè  – the sculptural works Tatlin, Ella and Gina, the dining tables Aqua and Croma and finally the armchair-lily Getsue.

An emblem of top Italian quality in the lighting sector is Slamp and its collaboration with authoritative designers such as Adriano Rachele, Lorenza Bozzoli, Doriana and Massimiliano Fuksas. While the Bar degli Azzurri is embellished with the elegant La Lollo, Chantal blue transforms the Hall into a marine surface where the waves ripple and fade. Meanwhile, Mille Bolle adds a playful touch to the Lounge, reflecting the details of On The Rocks, Etnastone (coffee tables by Emmanuel Babled) and the wallpaper of Francesco Simeti. Alternating touches of .exnovo lighting furnish the Coni project with 12 Louie hanging lamps, designed by David Nosanchuk and created with 3D printing technology.

But what kind of place would it be without an exterior space to admire the landscape in comfort on Ethimo products?  The centrepieces are the Village and Costes sofas and armchairs, Elìt and Ocean sunbeds and the Swing. The warmth of the wood and the lightness of the metal combine perfectly to produce results that interpret the Italian culture of open-air living in painstaking detail.

But Kartell and Gufram are also taking part in the initiative.  The latter’s iconic Bocca, devised by Studio 65, stands alongside The end of Geography by Guendalina Salini at the entrance. Kartell is proposing three models of chairs: the transparent Louis Ghost, Comback in a sliding, yellow version with 4 legs, in white and blue.

During the sixteen intense days between August 5-21, relaxation will be a fundamental factor for the athletes. That’s why the long experience of Italian design can make a significant contribution in going for gold.