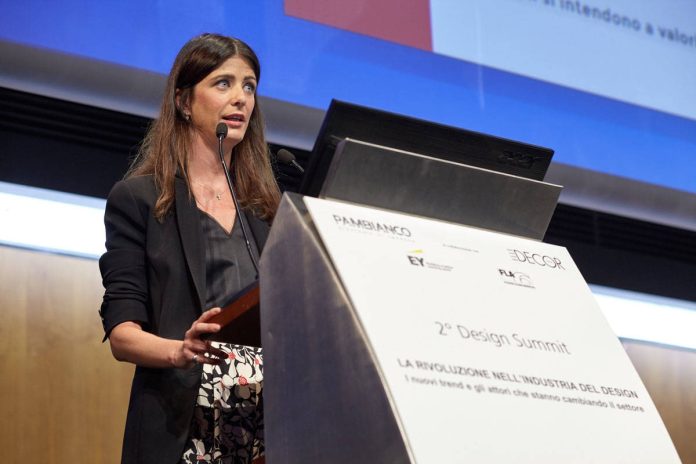 Yesterday was a really busy morning at the Palazzo Mezzanotte in Milan where, under the guidance of Enrico Mentana, director of the TG7, were presented the figures concerning some of the most interesting economic trends that attract the attention of major industry players on the changes towards design approach of consumers, young , smart or mature that always more frequently "lives" between the digital world and social network platforms.

The large amount of sector leaders involved in the conference helped to demonstrate the market's importance of Millennials – young people aged 28 to 36 years according to Pambianco. They're not just consumers on the verge of purchasing the first house, but also regulars at the online world where consumers are encouraged to purchase, often through social networks, thanks to the emotion that an object can generate through a digital post. The feelings inspired by a smart purchase make happy those attracted by the appeal of design particularly attentive to sustainability; they prefer to acquire in privacy, contradicting a few minutes while sharing it with its online community. A phenomenon that involves always more consumers of the international scene, and drives companies to adapt business and visibility strategies to make the values ​​of its brands and products more recognizable. A theme also discussed in the May issue of IFDM dedicated to the American market.

Thanks to the participation of the protagonists and the companies called to confront each other on the stage revealed the common need to significantly expand the knowledge of design in the world to support a greater understanding of the values ​​of Made in Italy. A piece of furniture and design that comes from local producers factories must be told before being sold, especially in America, Asia and the Middle East where consumers aspiring to buy a high-quality piece of furniture are not always prepared to appreciate it but would pleasantly add it in their own homes.

Considering the collected data, we start from the presentation of Roberto Snaidero, President of FederlegnoArredo, showing how the sector is growing again. "In 2015, after years of crisis, turnover began to rise again (+ 3.4%) reaching 24.5 billion euro". A growth trend also confirmed by EY for 2016, reaching a share of 40 billion (+ 3.5%).

The future of design companies will depend on the ability to adopt a multichannel approach to sales. A network that includes the geographical distribution but above all also extends to the web, following the second positive trend for this market: the online diffusion of design through sophisticated e-commerce platforms. As confirmed by the data illustrated by Paul Lobetti Bodoni from EY on e-commerce, which is now for the European sector about 6 billion Euros. Even in Italy "the digital channel is growing rapidly – explained Laura Angius, CEO of furniture portal Lovethesign.com -. In the last two years online furniture sales registered an increase of 39% reaching € 566 million on a total turnover of e-commerce in the country worth 19.3 billion ".

The speech of Giovanni Anzani, president of Assarredo and CEO of Poliform, highlighted the importance of conquering the young market in a different way, following specific skills, personalizing the offer and distinguishing on the market. The current difficulties for Italian furnishing companies resides "in operating in international fluctuating markets", on which, however, it is important to persist, given the positive data export annually provided by FederlegnoArredo, where in 2015 the growth reached 7%. "We need to enhance communication. Italian design is enjoyed but is not understood "- with these statements Anzani, communicator par excellence, invites us to reflect on the importance of strengthening communication strategies. An important feature such as the culture of project, was instead the subject of dialogue of the interventions of international architects Patricia Urquiola and Carlo Colombo, whose shared vision invites Italian companies to create a system to enter large international projects. Finally, there have been recurrent "hot" topics for entrepreneurship in the sector, such as growth through acquisitions  mentioned by Pierluigi Coppo from the Sambonet Paderno Industrie, and the strength of the contract industry told by Carlotta de Bevilacqua, Vice President of Artemide, a player that carries out international contract projects with outstanding success.

During the panel discussion that involved Paolo Colonna, founder and promoter of IDB, Giovanni Tamburi, president of TIP and Barbara Lunghi, head of small & mid-caps primary markets of Borsa Italiana, the final conclusions highlighted the ongoing changes in the mentality of Italian entrepreneurs, now more open to consider the involvement of investors, the guarantee from the side of the investments funds and the Stock Exchange to support the company owners during the change, respecting the DNA, and the utility of merging companies to establish new synergies.