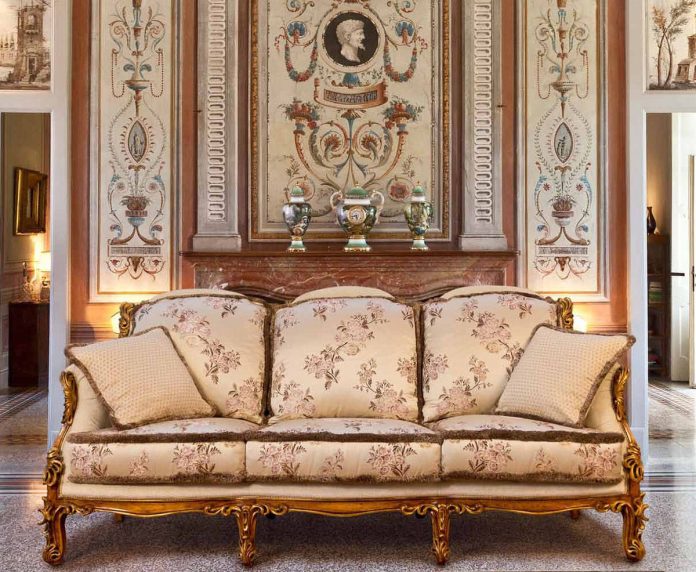 There is no doubt that Classic is a firmly established niche within the modern interior design industry. Yet it is equally true that Classic is an historic sector, with a public as loyal as it is open to new challenges. All of these elements find their place in Altoclassico: a total of nine companies have joined the collective, which has been a fixture in Pavilion 2 at the Milan Furniture Fair for years. The body behind the initiative is the Brianza Promotion Centre in Cabiate, which is now offering a unique opportunity to those companies that have for generations purveyed the quintessential values of classic Italian style. These values were at the heart of this year’s 55th Milan Furniture Fair, with films, exhibitions and installations all used to express the very essence of the style.
Allow us to introduce the nine companies in question: Galimberti&Co, Binda Mobili d’Arte, Linea Viganò, F.lli Origgi and MGC represent the best of timeless furniture and soft furniture, while Stilars, Nuova Cev, Silver Tre and Tiche Porcellane d’Arte champion the use of metal, porcelain and glass. IFDM will focus on these four home decoration brands in our next article, but for now let’s take a closer look at the first five companies.
All five declared themselves delighted at the support provide by Altoclassico, which assumed full responsibility for setting up the stand under the watchful gaze of president Elio Turati – the owner of Turati Boiseries. Renewal is a trend sweeping through the world of Classic, and the collective is no exception: this year, it opted for a colour scheme of sugar paper and blue, referencing one of the biggest colour trends of 2016. «It’s important not to go too far, not to overstep the boundaries,» explained Turati. «The sector has clear values that define its very nature and so it is vital that we respect them.»
The key market for the sector is Russia and its neighbouring countries, which are now showing signs of recovery after a period of decline. Progressive growth in demand from some Asian countries – Singapore, China and Japan – as well as the Middle East has also been detected. Roberto Galimberti, of solid-wood furniture brand Galimberti&Co, explained how important the region is to his company: «Acting as subcontractors, we’ve created the interiors for the Palazzo Versace hotel in Dubai, as well as two other hotels in Doha and Morocco. We’re also developing prototype rooms for a project in Qatar, which we hope to confirm in the near future.» As regards the contract sector, MGC has a project to furnish a yacht in the pipeline.
More doors are opening all the time, thanks in no small part to the craftsmanship and tradition that characterise each of the Altoclassico companies. The Milan Furniture Fair undoubtedly increased their visibility, but Paolo Binda – of Binda Mobili d’Arte – has noticed another trend gaining speed: «Clients want personalisation and are constantly asking for modifications on the objects we display so they can have unique, one-off pieces. The catalogue merely acts as a starting point, after which it’s necessary to create a bespoke solution.»
The president of Altoclassico believes that the collective is going strong, both in terms of the high-quality products being created by its collaborators and the number of new contacts forged courtesy of Milan Furniture Fair. «Altoclassico’s tenacity is what’s enabling us to generate success. We’re also showing willing to use our skills to help small- and medium-sized businesses, who would otherwise have to face a raft of difficulties were they to try to make a name for themselves at Rho Fiera alone.»
Stay tuned for episode two!

(Double) appointment in Miami for leaders in the cruise ship sector