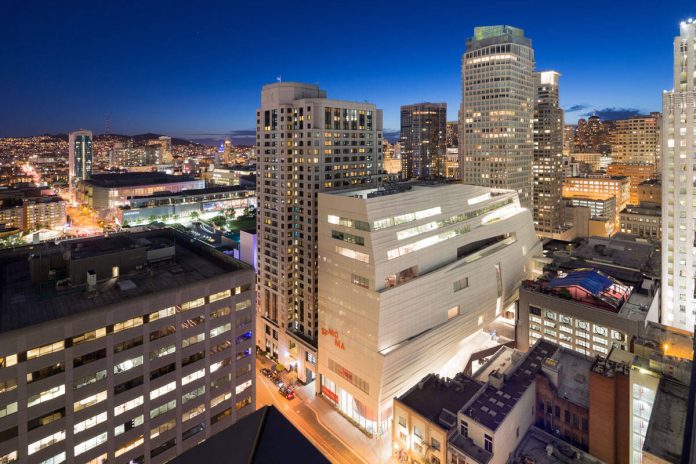 The San Francisco Museum of Modern Art recently re-opened. The museum is an exclusive artistic platform for modern and contemporary art on the West Coast.  Its sizable expansion took place under the supervision of Snøhetta, the design studio founded by Craig Edward Dykers and Kjetil Trædal Thorsen. This Norwegian duo also takes credit for the Norwegian National Opera, the Oslo Ballet, the National September 11th Memorial Museum Pavilion at the World Trade Center in NYC among many other important works. They are currently working on numerous cultural and civil projects, including the expansion of Time Square.

With Dykers hosting the opening ceremony of the San Francisco Museum of Modern Art , guests included congresswoman Nancy Pelosi, mayor Edwin Lee and the chairman of the SFMOMA Board of Directors, Charles Schwab; the new collections that were presented at the opening, which included performances and free entrance, were enjoyed by over 5 thousand people.

Increasing the premises from 6,500 to 15,800 square meters made it possible to exhibit the works of art of the Donald Fisher Collection (almost 260 pieces created in the post-war and current periods). Even more works were able to be exhibited, including over 17 thousand photographs from the Pritzker Centre for Photography, provided by Lisa and John Pritzker; there are also exhibits dedicated to paintings, sculpture, Media Arts, with an emphasis on architecture and design. 6100 pieces were on exhibit, including furniture, products and design illustrations, all of which have contributed to ensuring the San Francisco museum’s rightful place as a sector institution.

The entire floor containing significant artwork, featuring Richard Serra’s monumental sculpture Sequence , can be visited free of charge . This constitutes an absolute novelty, as do the partnerships with schools aimed at motivating promising young students to participate.

The building's facade, which incorporates the historic structure designed by Mario Botta in 1995, amazes viewers as it reflects the typical San Francisco Bay haze. It was created using over 700 reinforced fibreglass panels which have been formed into unique shapes. Snøhetta has also worked on the stairs that connect to the second floor atrium and the six external terraces, which are home to various sculptural structures.

The art of imperfect beauty