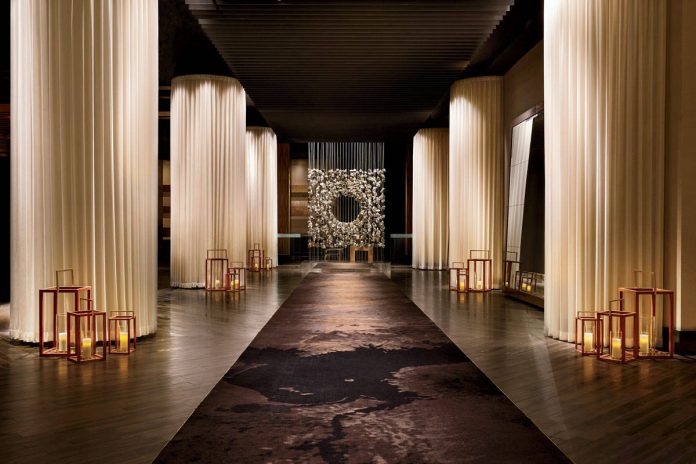 Delano is one of the few no-game hotels in Las Vegas, entirely against the endless and monothematic local proposal. The story tells that Delano’s arrival on the Strip brought a concept of hospitality which is built on a different basis: welcome, bigger rooms, human relationships, high standard of services and a very exclusive food&drink offering.

When you arrive at Delano, time stops, you can finally leave the constant frenzy of lights and sounds behind and lose yourself in an unexpected reality, which is made of details and moods surrounded by something completely different from what there is outside. No dozens of restaurants, no trace of the hundreds shops, which usually crowd the mega-hotels and, above all, no casinos. The older brother, Madalay Bay, is only a few meters away and it is in full harmony with the city attitude.
Delano identity is the fruit of the cooperation between MGM Resorts and Morgans Hotel Group (a giant of the sector which owns from Mondrian and Morgans – both in New York – to Delano in Miami).
The project’s aim was challenging: to marry the style of Delano South Beach in Miami to the sparkly no-stop background of Las Vegas.

The bravery and the synergy between the partners created a real experience hotel – renovated and enriched in 2014 – which offers a different Las Vegas to the luxury enthusiasts and to Morgans aficionados: a luxury and cosy version of hospitality.

Here, the video of the Delano new launch

All the shades of blue

In Saint-Tropez the first LAGO Welcome