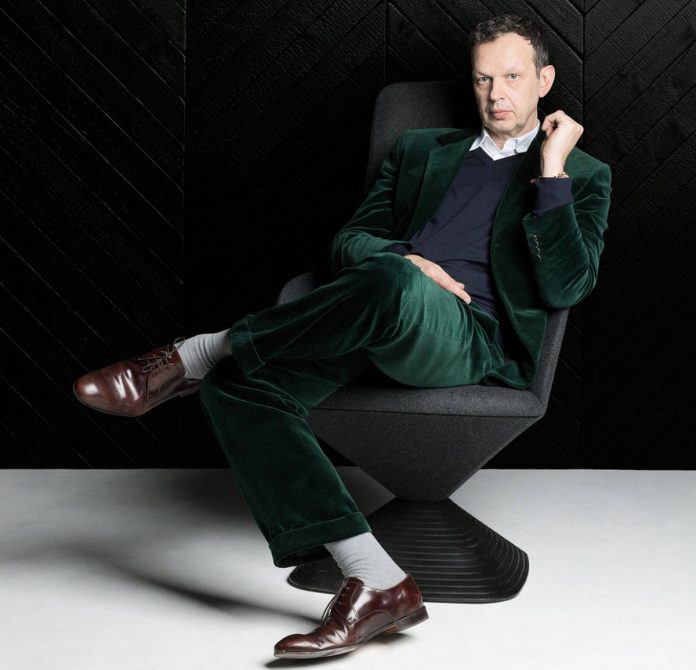 A designer-manager who flies high, but down to earth: this is Tom Dixon, a design man on 360 ° with a very unusual career path, a concrete character and at the same time a little unreachable.

IFDM met him at The Restaurant, the FuoriSalone 2016 installation, made at the Rotonda della Besana, along with the historic partner Caesarstone. The Restaurant is one of the current summary of the “Dixon-thought”: the harmonious combination between material, design and food. A representation of effect in a habitat itself charming. At ease in an environment that feels, Dixon has told: the origins as a musician (playing bass), his passion for engineering and sculpture, the encounters, inspirations and ambitions.

You are a producer and an interior designer and propose environment among residential and contract?

We’re very happy to have an interior design company as well, and a proper showcase. So, even here at The Restaurant, we are showing you into an exact context compared to maybe a lot of the manufacturer brands.

What does it mean?

I’m not sure, but sounds good! I’m joking. I mean, I think it’s the same discussion about public or contract, you know. I think you see here in the kitchen… I want things to be sculptures but I think they need to function as I’m not an artist, I’m a designer.  Because if I only do sculpture, I’m lost, I like things to have a function, but if I only do function, I’d feel a bit bored.

The restaurant is the pill of the success of Tom Dixon?

Indeed so. I find that the kitchen is an interesting space, designers and chefs have a mission in common: to transform a raw material into something precious. That between food and design is an alchemy, pervaded by a particular energy.

This morning I spoke with a colleague and I said him: “this afternoon I will interview Mr. Tom Dixon. And he said me: “Mr. Dixon is a one man, one British heritage against the world”. Do you agree? Ok, not against all the world maybe…

Yes, maybe it’s too much. Britain has produced many talented designers. We have been an export nation for ideas. All I have done is to start my company, as do historically Italians, and give her my name, as in the fashion world. Before starting this activity, I have often wondered why the designers fail to comply with this step and do not create their own brand. Not even an industry guru such as Philippe Starck has doesn’t have his own company.

Who is the instigator of the Tom Dixon style? There are a man, a woman or a tradition, not necessarily British, who have left their mark?

Not having studied design and having never had any intention of doing this job, I was influenced above all by the sculpture and engineering. The things that impressed me when I was a kid were more like the heroic sculptors of the early 20th century. People like Noguchi or Henry Moore or more recently like Anish Kapoor. I was watching, seeing those things, not design things. And, on the other side, the great engineers, like Eiffel or Brunel, brilliant British civil engineer of the 19th century, were people I thought were amazing. Another factor is the music. I was a bass player in a disco band. So, my influences were more between Jimi Hendrix and The Chic. I find extraordinary Panza, famous collector of modern art, and I found I was a big fan of the ’60s.

That’s why my aesthetic and my approach to business diverge from those of someone who has always wanted to be a designer and followed a regular training. Then, over the years, I have met other people and started to learn more about the history and the unique aspects of design.

Which is your relationship and your thinking about USA and Middle East markets?

Although born in North Africa, I never ventured into the Middle East market, but do not rule that can happen soon. America, however, is a rapidly growing market, it is also changing mentalities regarding contemporary designers. Americans have always been rather old-fashioned, loyal to the Shabby Chic style and Martha Stewart. Now they are asking for more modern products, it’s a quite exciting scene up there.

What do you think about hotellerie?

It’s fantastic, it’s the dream project in a way, because it has all of the different spaces: it’s got domestic spaces, it has got big social spaces, lobbies, it’s got restaurants and spas, sometimes it’s got work spaces, quite often, as well, a conference room and the rest of it. In a way is a place where you can test out almost any type of furniture and if you can succeed in the hotel, you can pretty much succeed in any other field. We like hotels, they’re kind of great environment to do. We’ve only done one, but now… that was the hardest thing, is getting the job to do number one hotel. But now that we are super experts, we can do lot more. Tell everybody in Dubai, in New York…

Have you got a golden dream?

I’m pretty lucky that my dreams are kind of come true. Every day I do a different job: I’m flying off to America to open a shop and the day after I’m going to India to see a factory.

I’ve never really designed kitchens before: now I brought four of them to Milan. I like new adventures. After exploring different worlds – small accessories, household items, interiors, hotels, parks – I could dedicate myself to architecture and open space. In July we will open a new store in Los Angeles that we will share with a fashion house and a company in the food sector. It’s a big project and it will be interesting to experience the blend of interior design, food and fashion.

The (re)creative spirit of the Hermès world