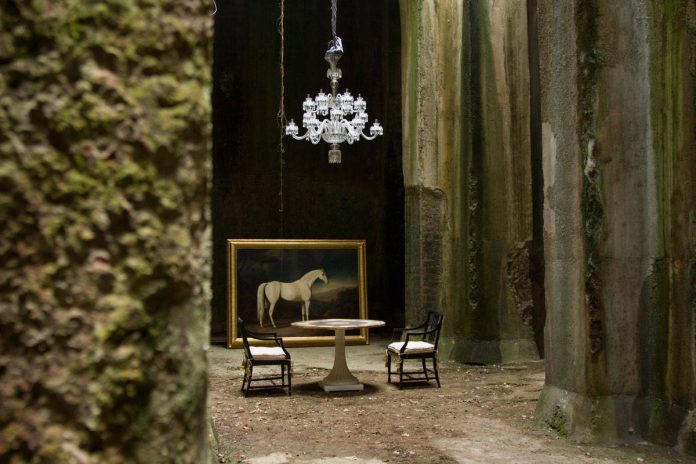 An “ancient” theater inspired by the Teatro Olimpico in Sabbioneta, which forms the basis for the entire conceptual space of the installation, featuring references to classicism and modern architecture with the artistic short film at the centre: almost 900 sq m in pavilion 15 of the Salone are dedicated to this multi-sensory journey, representing timeless Classic style as a versatile living category that traverses different eras, remaining constantly relevant. «When the Salone offered us this opportunity, we needed to find a new idea – explains Simone Ciarmoli, artistic director of the project along with his partner Miguel Queda –, also because Classic style has been talked about a great deal over the years. So for us it was vital to find a very strong idea and to make highly targeted choices. We wanted to astonish people, to push Classic taste to its breaking point, so it was necessary to aim for a very high level, a work of art». This was why the first choice of director was Matteo Garrone, who, with his excellent films from The Embalmer, to Gomorrah, Reality and Terra di mezzo, always favored the aesthetics of rupture. We started from here, with filming and photographs in a fantastic setting near Naples.

«I loved the original idea, in which Classic style, intended to be beautiful in the broadest sense, spans different eras, preserving its current, contemporary characteristics and building a bridge to the future – says Matteo Garrone –. This is why I imagined a post-nuclear scenario, a destroyed world in which children, who embody a pure vision and the ability to see beauty, save some pieces from the rubble, real “pearls” that have been preserved over time».

«But the short film was only one element, a “decoration” for the “furniture” that we had in mind and wanted to create – Ciarmoli remarks –, which required materials, processes and finishes that created a certain style when combined. Hence the exhibition, a series of “rooms” with a distinctly contemporary inspiration – distinctly contemporary because this is the undertone of the classical furniture that stars in them – with overlapping designs and experiences. Experiences such as that of the two young artists who collaborated in the exhibition, Lisa Rampilli and Marco Basta, her with her faces of classical figures inspired by the Archaeological Museum of Naples on blue velvet, he with his decorations inspired by ancient Greek vases on Rosenthal plates. And then there are the contemporary aspects: the projections, light, fluorescent colors inspired by Pop art, PVC-coated Liberty chairs in daring orange, amaranth, green and purple».

Naturally, for all of this the contribution of the production companies that collaborated in the project was fundamental: from the colors of the walls specially created by Oikos with fabrics by Dedar, which almost entirely sponsored the exhibition, to Frangi for the theater decorations, Fromental for hand-painted wallpaper, including in pure gold, CC Stone, Tabu, Ferreira de Sa, Voghi… The same goes for companies that provided the furnishings for the short: André du Dauphiné, Annibale Colombo, C.G. Capelletti, ColomboStile, Création Metaphores, Dedar, Frette, Medea, P&G Cugini Lanzani, Pozzoli, Provasi, Rosenthal, St. Louis, Sigma L2, each with its own specialty and all united by a great passion, which helped them to create wonderful room after room.

Taste the Architect: the new series by INDEHO