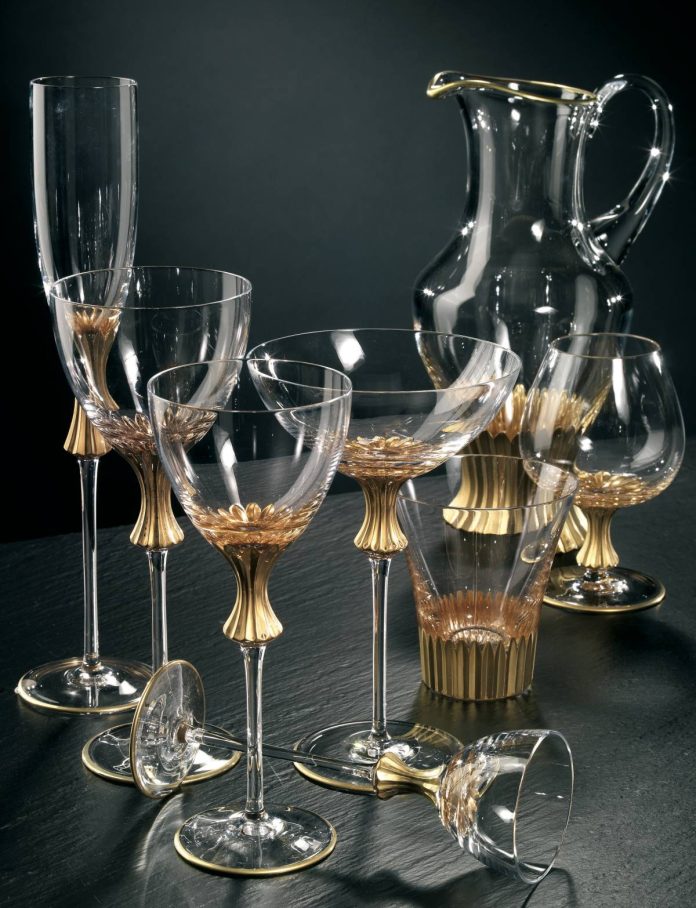 CreArt, from “Creazioni Artistiche” (Artistic Creations), was born from a meeting with its four founders – Natale Belli, an expert glass and crystal trader; Alfio Cinotti, a master in die-casting; and the Cappelli brothers, master glass etchers – with the precise aim of producing glass and crystal collections, at that time combined with die-cast, gilt metals in perfect classic style, including tableware and home furnishing accessories.
In just a few years, CreArt achieved major success on the Italian market, and its participation in various international trade fairs in the sector it made its mark also on a number of international markets. This exponential corporate growth led to its need for more production space, warehouses and shipping logistics.

For this purpose, 1970 saw the start of the building of a new plant of around 4,000 sq.m. which was inaugurated in 1973 and is where the company is still based.

The CRE ART collections in 24%-lead glass, etched and decorated by hand, with 24kt gold, platinum, silver and adorned in gold or silver-plated brass, lend honour and prestige to the concept of “Made in Italy”, to artistic creativity and to the talented workmanship of this major production company.

CreArt was founded in 1968 in Empoli, near Florence in Tuscany, anarea steeped in artistic and glass-blowing tradition, renowned since the fourteenth century for its glass and, later, its crystal production.

Production is flanked by the development of other activities associatedwith the potteries, with the aim of embellishing and enhancing theglass output.

The new building was fitted with all the equipment needed for the various etching, grinding, decorating and assembly processes and subsequent warehousing.

CreArt has produced collections inspired by the artistic creations used in the splendid Italian, French and English palaces of the eighteenth and nineteenth centuries, always using the highest quality materials, to become an international leader in this particular industry.
In 1990 the founders’ children, Debora Belli, Gaia and Gianna Cinotti and Raimondo Cappelli, took over management of the company; not the simplest of handovers but a precise wish of the children, a true vocation.

Having grown up around the company and having learned all the secrets of the trade from their parents, they planned to continue the family tradition with enthusiasm and talent, and rightly so. In fact, in Tuscany, traditional expertise is not only a centuries-old heritage but it
is art, culture, passion and love for one’s work. Following the handover, CreArt took on a new vitality, creating new and more elaborate collections, and as a result of a considerable increase in international marketing, managed to sell its products worldwide.

One of CreArt’s greatest strengths is the enormous assortment of articles ranging from tableware to ceremonial pieces and furnishing accessories such as lamps, bathroom fittings, glasses and goblets, table centrepieces, celebratory gifts and candelabras. Two of its outstanding collections are the classic Dodo Doni and the contemporary Flairy.

Elegance and traditional craftsmanshipalong with a strong focus on customer service, are the characteristics most loved and admired in CreArt creations at the world’s major Expos.

CreArt will be at Salone del Mobile 2016, Pad. 2, Progetto Gallery

The original values in current creations

Croce and the natural materials