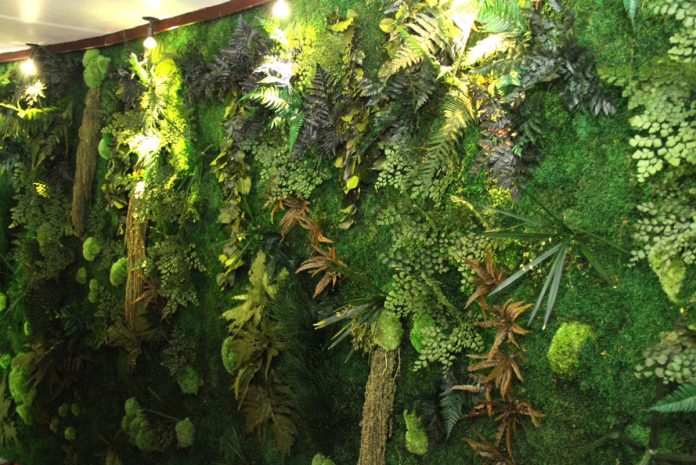 This is not living vegetation but it imitates the original so well that it even blends in with it, acting as a substitute wherever the use of fresh plants would be impossible or economically infeasible.  We refer to the stabilized greenery that can be used to create three-dimensional artworks, entire wall surfaces and installations that offer fascinating textural effects of great impact, allowing for unlimited personalization in terms of composition.

The stabilization of natural leaves, moss or lichens is an eco-friendly process that substitutes plant sap with a preservation product consisting of water and a natural glycerine-based substance.

Stabilized plants retain the look and consistency of their fresh counterparts, but without any need for irrigation, light or particular care, remaining unaltered for periods that can vary from seven to ten years, according to the type of environment in which they are positioned. They also possess interesting sound absorbing properties and help stabilize moisture levels in the environment.

“Stabilized greenery is still a niche product to which the mainstream public has not yet latched on” explains Sergio Lunardi, CEO of Ars Nova, a firm located in Andezeno (To) which, after more than thirty years’ activity in the business of fresh plants and flowers, started to focus its attention and efforts on stabilized products in the 90’s, on the grounds of an intuition that, in time, the market would be increasingly oriented towards alternative indoor greenery solutions.

“It is a mistake to compare stabilized vegetation with fresh plants and flowers – Lunardi goes on to say – No one loves living plants more than we do, with the full range of emotional and existential hues associated with their inevitable cycle of life and death.   Stabilized plants are quite another story altogether. Thanks to the new solutions offered by these products, it is possible to introduce nature to urban locations and interiors where it is generally more difficult and expensive to do so, enabling the plant world to penetrate markets and, above all, business segments where it was formerly almost unheard of”.

To mark the opening of Expo, for instance, Zara has inserted three special Ars Nova creations in an installation called Cloni. A large platform of light in the centre of the space contrasts with the decorative elements of the store’s historic entranceway in Milan’s Corso Vittorio Emanuele. The clones and stabilized plant creations encapsulated in two metre-high plexiglass cylinders underline the impressive verticality of the space while visually connecting the two floors of the store.

“The use of stabilized greenery – explains Matteo Moscatelli, architect and lecturer at Milan Polytechnic  – has become particularly popular of late in retail ambits, offices, exhibition spaces and hospitality establishments. In such contexts, stabilized plants may be applied in the same way as a construction material, either as a finished product or as part of an interior design project, interpreted as a sort of texture – possibly three-dimensional –  to valorise particular backgrounds or perspectives, even of considerable dimensions.  In this respect, the stabilized plant concept represents a positive innovation, since it enables greenery to be introduced in spaces which would otherwise not be suitable for technical, practical or economic reasons”.

In Beijing a design hotel in a natural setting