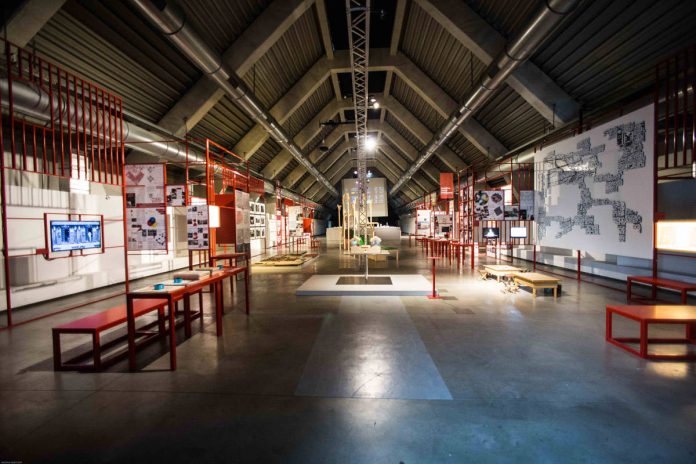 The renewed layout of the exhibition that in 2014 interpreted the theme “Absorbing Modernity”, in the year of Expo, launches once again the themes that link the host city, Venice, the capital of China.

“AcrossChineseCities–Beijing2015” is a conversation between built forms and communities around anarchitecture of resilience and relationships unique to Beijing and the Dashilar area. An investigation about the modality through the design can influence the phenomena of resilience, creativity and development of form and urban quality and a reflection on the processes and factors that mutation in the last 100 years have drawn the shape contemporary urban Beijing.

The spatial arrangement of the two components of the show elicit cross-references and counterpoints between the city’s macro transformations of a seemingly modernistic evolvement, and the micro change-agents that traversed the history of Dashilar ever since its foundation as the ‘outer city’ during the Yuan Dynasty.

Located southwest of Tian’anmen square, Dashilar is a densely populated quarter of traditional courtyards and alleys (hutongs) where behavioral and spatial hierarchies were often subverted. Here specialized craftsmanship and performing arts once flourished so making it the commercial and cultural heart of the capital since the Ming Dynasty. Through seven thematic frameworks “Across Dashilar” renders the entanglement of socio-cultural dynamics, economic ecologies and political factors that shaped the unruly architectural and social features which have long remained untouched by tested methods of urban revitalization.

A series of case studies on building typologies, traditional industries, entertainment outlets like theatres and tea houses, as well as policy shifts around preservation and property rights, contextualize the more than 20 contemporary projects interpolated all throughout.

As a result of the three year cooperation between Beijing Design Week and Dashilar Platform with the support of Xicheng District government, part of these interdisciplinary works were realised by a wide range of studios and creatives in response to the area’s infrastructural and communal ecosystem as part of a regeneration scheme based on a ‘nodal approach’ of mixed urban curation and community participation.

Ensuing from a collaboration with Venice municipality, Beijing Design Week’s participation to VENICE TO EXPO 2015 will be a second step in a three-year long program of cultural collaboration and exchange between the two cities.

The exhibition will be opened till 31st October 2015 in the Science and Technology Park Vega – Antares Pavilion, Venice