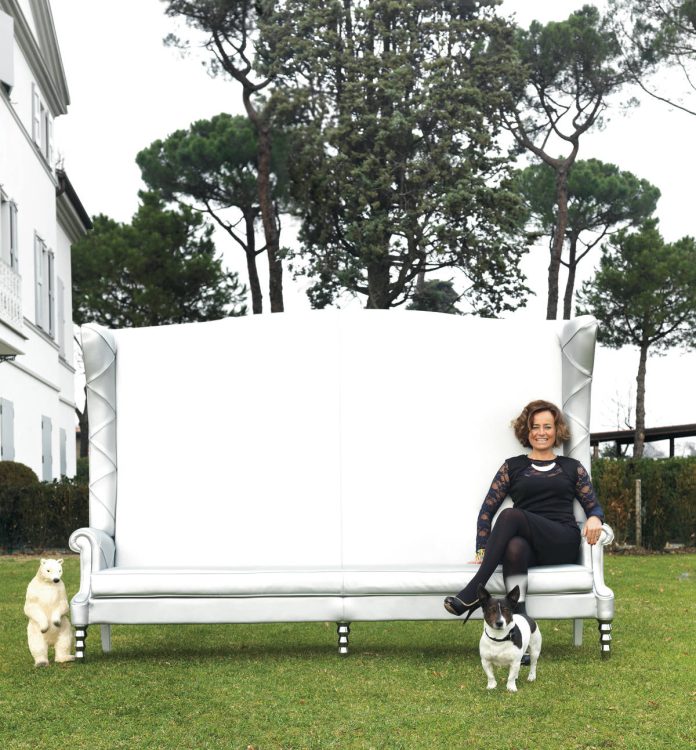 1- It is Visionnaire’s tenth anniversary this year? How are you going to celebrate?

We shall be celebrating on our stand inside the Salone with a theatrical idea of strong emotional impact, which is why we have dubbed it “Coup de théâtre”: it hosts a vast collection designed in collaboration with various designers, strongly inspired by the deco style and the historical roots of our brand. And then in our Milanese showroom in Piazza Cavour, where we are presenting a collection of objects inspired by nature all designed by Hong Kong archistar Steve Leung.

2. What lies behind the success of this brand?

It depends on a keen spirit of observation as to what is happening all around us, combined with the freshness of an original brand concept, which is even more important than the essential factor of product quality, projected towards a complete furnishing offering that is never banal and custom-made for each one of us.

3. What have been the most important landmarks in the course of this first decade?

Each year has been a challenge. The first year, with the collection ispired by the Gothic, was certainly a memorable one also for the immediate response from the global market. Then came 2008, with the opening of the Visionnaire Design Gallery in the heart of Milan, immediately followed by Visionnaire Bologna. Thanks to the many people who have supported us, Visionnaire is today a Luxury Brand, widely acclaimed in over 50 countries with 18 mono brand stores. We can proudly say that, in 2005, Visionnaire changed the concept of Italian design by widening the range of manufacturing processes and the horizons of style.Our company celebrates Vionnaire’s tenth anniversary, without forgetting that our parent company Ipe has been in business for 56 years.

4. What is the inspiration behind the 2015 macro theme?

“Coup de théâtre” is ispired by Art Deco's style and the birth of spectacular interior furnishings in the early 20’s of the last century, when even a rug, a wallpaper or an accessory became the authentic protagonists of living spaces designed by architects, design firms or the ateliers of ingenious and refined interior decorators such as Renee Arbus, Jacque Emile Ruhlmann and Pierre Chareau, to name but a few; these personages gave profound and exhaustive thought to the twofold aspect of functionality associated with an idea of decoration and beauty. We want to promote this type of overall consideration of furnished spaces, going beyond that of a project contemplating the mere configuration of different products, to recount a consistent story in which each element is linked to the others by a strong overall concept. We wished to create a sort of theatrical representation of life, perceived as a great challenge, together with a widespread desire to share great discoveries. We are glad to associate the positive thoughts of those years to nowadays, an age in which Italy is starting afresh, ours being a country that has given a lot and still has a lot to give in terms of creativity and savoir-faire.

6. What is the stylistic trait of the collection signed by Steve Leung?

We have started out from a concept that has always inspired Visionnaire: nature and its two-sided character, that of being a protective force of delicate fragility. Steve has explored this duality of nature with intelligence and perspicacity, thanks to his oriental sensitivity:   each object is perceived as though it were naturally unique and precious but, at the same time, endowed with great functionality, a component that is equally necessary in nature and in the animal world. A limited edition called Nature's Jewel Box waiting to be discovered in each and every detail, in the same way as children observe nature: with sheer curiosity and a spirit of excitement.

7. Alongside its interior furnishings, Visionnaire has always focused considerable attention on the world of art. Do you have any artistic collaborations in the pipeline for this year?

"Safari Moon" is the title of the exhibition we willi launch  at the Salone del Mobile and which will run until 18 July at the Wunderkammer Visionnaire. Safari Moon will try to convey to visitors a sensation of entering another reality, a sort of trip, a dream-like safari through works of art which, as well as drawing inspiration from nature, carry those values associated with craftsmanship and the valorisation of materials so dear to Visionnaire.

Watch also the video of the interview with Eleonore Cavalli.

Sake Ceremony at the Armani/Nobu restaurant