Nominated for four Academy Awards, many Golden Globes and BAFTA awards (issued by the British Academy). A director of highly acclaimed films enjoyed by international audiences. But few people know that Luca Guadagnino also has a great passion for interior design, though they might have guessed when they saw the sophisticated sets of Io sono l’amore (I Am Love) or the painstaking 1980s reconstructions in Chiamami col tuo nome (Call Me By Your Name).

“My unspoken desire is to be an interior designer,” he told a journalist from the Style magazine of the New York Times. So much so that he has founded, in 2017, the Studio Luca Guadagnino (SLG), a team working on interior architecture and based in Milan. The firm has carried out projects for private clients like Federico Marchetti, founder of Yoox Net-a-Porter Group, and luxury retail spaces, including those of the skincare brand Aesop in Rome and London, and of the sustainable fashion brand Redemption in New York. 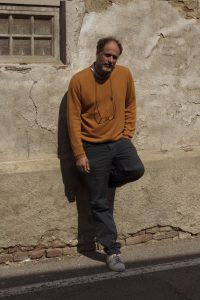 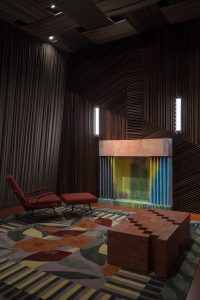 For Milano Design Week 2022, the studio made an installation at Spazio RT,  a creative space and gallery at Via Fatebenefratelli 34. Accanto al fuoco/By the fire reveals not only the in-depth research conducted by SLG, but also the admiration for Carlo Scarpa, the Italian architect from the mid-1900. Moreover, the installation embodied the approach to geometry as an essential part of space, a legacy of Modernism and – in particular – of the architecture of the postwar period in Italy.

In a large room, two living areas are placed in a specular arrangement, each with its own diversities. Both contain a fireplace composed through the assembly of smooth columns, designed by SLG, one in Ceppo di Grè Italian stone, the other in ceramic with pastel hues, liquid like watercolors, produced by Nymphenburg Porcelain in Munich. 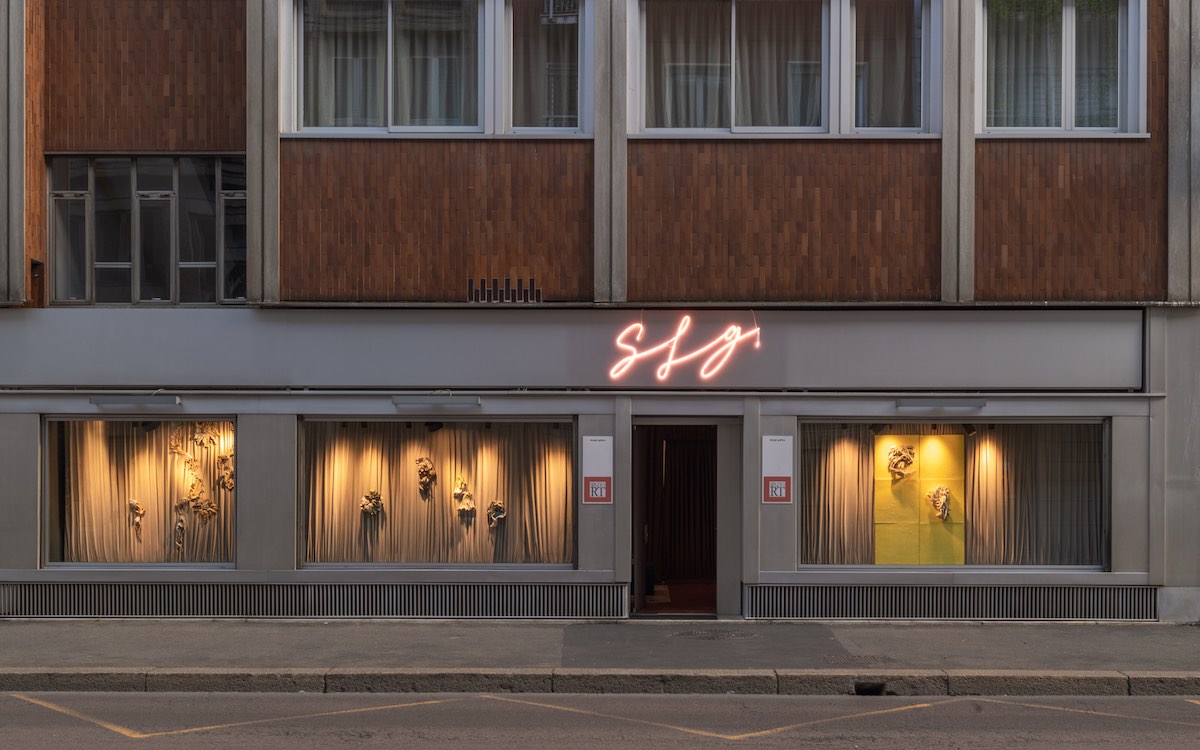 Slightly above, appliques in glass by FontanaArte could be seen (vintage on the side of the stone fireplace, designed by SLG on the other), with technical lighting by DeltaLight. A series of square and rectangular tables in black granite and red travertine, also designed by SLG, joined three vintage chairs by Ignazio Gardella (the Digamma produced by Gavina in the 1950s), gazing at the hypothetical fire atop a pair of wool-silk carpets. 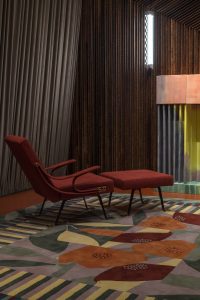 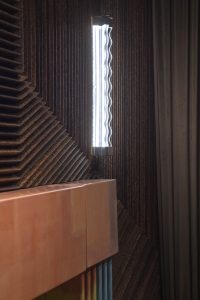 Woven by La Manufacture Cogolin – a venerable workshop located near Saint-Tropez – these two carpets have motifs of Pop Art flowers by the graphic designer Nigel Peake (who frequently works with Hermès). All around, a soft, refined atmosphere is created by triangular panels in palm wood and oak by SLG, and walls clad in pleated gray velvet. 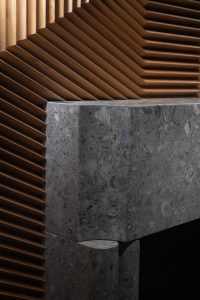 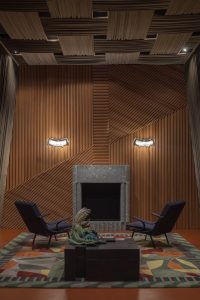 Floral sculptures in ceramic by the artist Francesco Simeti, a friend of Guadagnino since the days of their youth in Palermo, close the circle of extreme refinement, honed down to the smallest details. For Guadagnino, décor is “an essential element in the creation of space, not just something to add at the end of the process.”