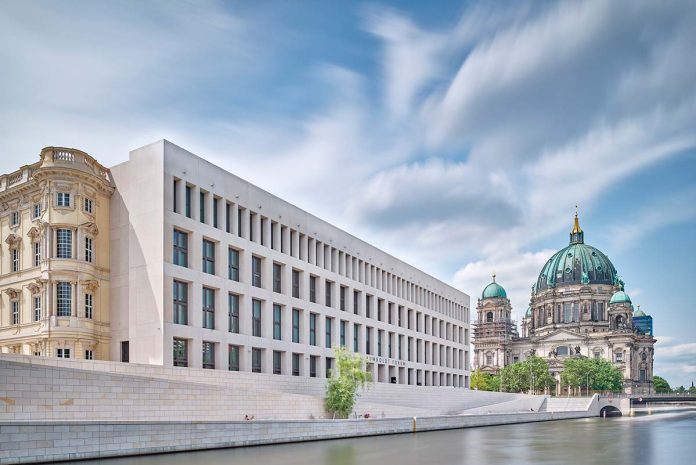 Neoclassical and hipster, historic and novel, monumental and dynamic. When you try to find a label for Berlin, this lively, liquid and protean city seems like a mad river churning through unusual trends and routes. A city of striking contrasts, where the past – at times harsh and overwhelming – meets and blends with a vibrant present to give rise to a true open-air museum. Seen as the European capital of culture, cradle of the Bauhaus, Berlin offers a variety of styles, works of architecture and must-see destinations for design lovers.

Among the city’s landmarks the Neue Nationalgalerie, a museum-icon near Potsdamer Platz designed by the great master Ludwig Mies van der Rohe, has recently been refurbished by another great designer, David Chipperfield, who has managed to update this 1960s masterpiece while preserving its aura, in a rigorous, conservative approach.

For those wandering the sights with kids, one new highlight on the map is Anoha, the space of discovery, exploration and play, designed by Olson Kundig inside the Jewish Museum of Berlin created by Daniel Libeskind, a structure-pathway in wood inspired by the tale of Noah’s Ark and the Torah, with 150 recreational sculptures that stimulate the imagination of kids and adults.

Vivacious and multicultural, Berlin amazes you at every turn with its revitalized and reinvented places: like the historic Blauer Stern cinema from 1933 in the Pankow district, reimagined by the local studio Batek Architekten with LED lights, wallpapers and red velvet.
One of the new entries is the Humboldt Forum (on cover), a maxi-center for the arts and sciences opened in 2020 on the island of museums in the heart of the city, providing the largest European cultural center, with an area of 30,000 square meters.

And that’s not all: the new Exilmuseum designed by the Danish architecture firm Dorte Mandrup, a museum that narrates the human experience of exile, will incorporate the ruins of the historic Anhalter Bahnhof, from which thousands of people fled into exile during World War II.
Raise your eyes skyward to capture and admire recent works of architecture, like the futuristic headquarters of the German publishing house Axel-Springer designed by OMA, 52,000 square meters of workspace for over 3000 employees, in a permeable structure that opens to the city.

For a gourmet break in a design site, see the Sofi Bakery in the Mitte, a former brick factory converted as an organic bakery with design by the Danish architects Mathias Mentze and Alexander Vedel Ottenstein, based on collaboration between the Danish chef Frederik Bille Brahe and the founder of Design Hotels Claus Sendlinger – a paradise for aspiring bakers, with a visible kitchen that displays the entire process of making bread.

Other recent works of architecture include the new HQ of Sony Music Entertainment Germany designed by the firm Karhard, 7844 square meters on Bülowstraße in Schöneberg, with interiors shaped by the atmospheres and glamour of the clubs of the 1980s, with plenty of steel, glass, glitter and colorful rugs.

Berlin also hosts prestigious furniture showrooms, like the Laufen store created by Konstantin Grcic, the affiliate of Magis Germany Gmbh, the headquarters of LenzWerk, the holding company that includes various companies specialized in furnishings, construction technologies and real estate projects. Berlin is one of the stops on the Together World Tour by Ideal Standard, during which Roberto Palomba, art director of Ideal Standard, said: “Berlin is modernity, a city that always looks forward, a place of exciting cultural moments. But above all it is the city that brought about the break from design for the few towards social design, for everyone.”

If you’re planning a visit, the best time is during Berlin Design Week, the period of intense creativity curated by Alexandra Klatt, usually held in late May and early June.

Johannesburg: what to do, what to see in this South African...