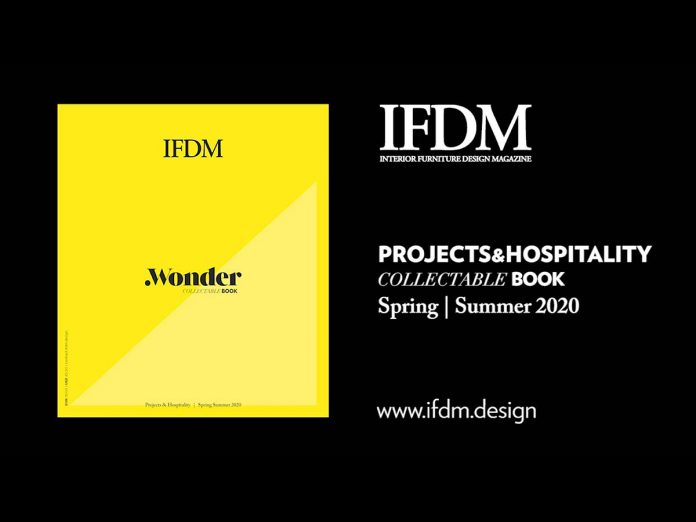 Now at its fifth year of existence, the Collectible Book of IFDM dons a new outfit, sealed by a genuine label that indicates its distinctive character – Wonder – becoming the protagonist of this publishing project.

For us at IFDM this implied ratification of a reality that has clearly been there for some time: the world of Design and therefore its Beauty, from the first edition in March 2016, have represented the guidelines of the collections focusing on Contract and Hospitality. Beauty at 360 degrees, not just aesthetic but also conceptual, the beauty that is not seen but perceived when we are faced with a project that attracts ‘only’ for the harmony it channels.

At the dawn of the 9th edition, then, beauty is acknowledged and displayed on the cover as a factor of re-branding, or more precisely of the consolidation of the title as .Wonder – Project&Hospitality Collection.

Wonder, for IFDM, means the best in interiors, design, architecture and production of furnishings. Wonder is the most significant of all the impressions and delights that can be conveyed to our readers.

The stars of this edition include internationally acclaimed talents in architecture and interior design: Gilles & Boissier, Shigeru Ban, Renzo Piano, Peter Marino, Kerry Hills, Waterfrom. An exceptional parterre de roi for exceptional projects, each with its own fascinating appeal. The new generations of design have also made some important achievements: art and architecture blend in the spectacular Nobu in Mexico created by the young Americans of PCH Studio, a true gem facing the ocean. The team of RBSGroup– unorthodox in terms of roles and forms of expertise – has designed the Olympic House complex in Lausanne.

The effect of a ship in London is triggered by the Standard designed by Shawn Hausman and Archer Humphryes. Every project of the Wonder book is a location to discover, also behind its outer image, to better grasp its prestige and opportunities. At the same time, the partnership with ColorWorks continues. The first two Color Design Stories touch on themes that have also been explored in the past: technology, human relations, ethics and aesthetics, but also go beyond to delve in sociology (with several surprises) and the field of neurosciences. This represents confirmation of the fact that a trend is a trend if it continues in time, and that its changing forms – as in the case of technology and its users – constitute an aspect to monitor and to comprehend.