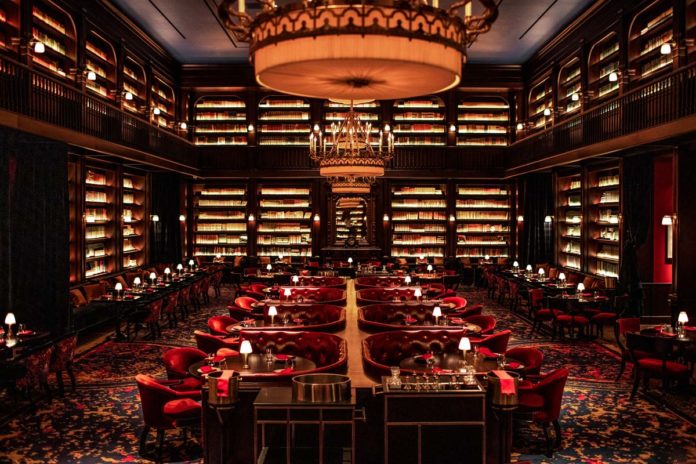 What happens if James Murren of MGM Resorts International and Andrew Zobler of Sydell Group often meet up at the NoMad in New York? Together they decide to bring the NoMad atmosphere and style to Las Vegas, getting Jacques Garcia, the French architect who did the interior design in New York and Los Angeles, into the act.

The intentions take concrete form in a resort-within-a-resort opened in October 2018 on the four upper levels of the MGM Park tower, a casino hotel with almost 3000 rooms located on the Strip in Las Vegas, facing a new public park made in 2016 by !melk. Garcia’s project exports an enclave of European taste to Sin City, with the romantic, soft atmospheres of the late 1800s and early 1900s, ‘impervious’ to the kitsch settings for which the city is famous around the world.

So while the NoMad Casino, the chain’s first, suggests Art Deco stylemes under a ceiling decorated with an original multicolored Tiffany glazing, the NoMad Restaurant replicates, on a larger scale, the bar-library in New York, taking its cue from the Real Gabinete Portugues Da Leitura in Rio de Janeiro: the two-story volume has bookcase walls with a height of 7 meters to contain 25,000 volumes, mostly from the collection of David Rockefeller, two chandeliers and a French fireplace from the 17th century.

French inspiration is also behind the NoMad Bar, echoing the small classical theaters, with dark red velvet drapes. The atmosphere of the three rooms for private events is even more intimate and classical: The Salon with cocktail bar, The Parlour with bookcases and sculptures, and The Cellar with a true collection of wine bottles, decanters and vintage glasses.

Every space welcomes guests – gamblers or not – with a true leap into the past, achieved by mixing decorative features and furnishings, like the bar counters and the wooden paneling on all the walls, display cases, mirrors, fireplaces and bookshelves, colors in deep tones like amber, red, violet, emerald and moss green, seating and upholstered furnishings in leather or velvet, antique drapes and rugs, soft and indirect lighting with chandeliers and appliques. For the luminous outdoor area with the bar-restaurant, a swimming pool and cabanas, opened to the public last month, the references are instead the Jardins Majorelle of Marrakech.

As in the other two locations, art plays a major role, entrusted to be-poles and Portraits de Villes, with photographs and works in different media, scattered everywhere in the communal areas and the 293 rooms and suites, all with custom or vintage furnishings. Like the screens, the large steamer trunks used as chest of drawers and minibars.

The Grande Dame is back