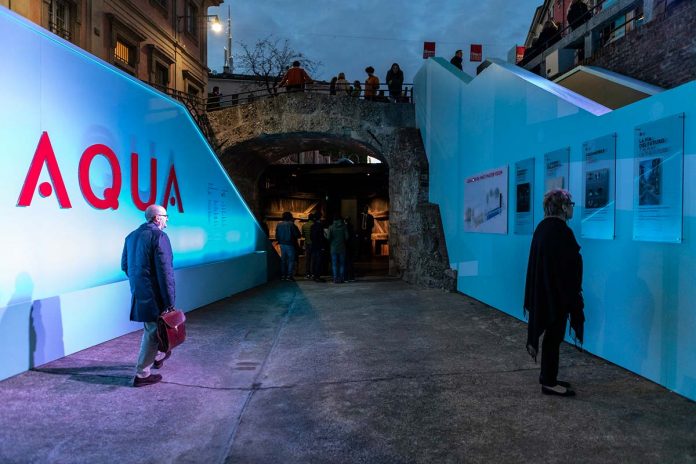 It is not merely a question of influence and inspiration, but rather a much broader phenomenon of cross-contamination and overlapping identities between the worlds of Design, Art, and Culture, the boundaries of which easily transcend one another to find an ‘other’ dimension that is even more experientially all-encompassing. This edition of Milano Design Week is proof.

The tight synergy in evidence between the city of Milan and the Salone del Mobile has brought to life a series of installations whose common denominator is the concept of ingenuity (a term that, for all intents and purposes, has become a part of the Salone del Mobile’s manifesto). And in this year that marks the 500th anniversary of Leonardo da Vinci’s death, the ingenuity par excellence of which we speak could be none other than his own. La Conca dell’Incoronata – of which it is presumed da Vinci oversaw construction as well as designed the famous wooden doors – welcomes “AQUA. Leonardo’s Vision”, a site-specific experience conceived by Marco Balich (developed together with Balich Worldwide Shows): an architectural graft in the form of a large body of water provides a ‘window’ into the Milan of the future.

Even closer is the relationship between Leonardo’s genius and Italian design, emphasised in the installation “DE-SIGNO – The Culture of Italian Design Before and After Leonardo”, on display within the Rho exhibition space. Using the language of film and theatrical staging, Davide Rampello and Alessandro Colombo offer a completely original account of Leonardo’s engineering design and the industriousness of renaissance workshops in relation to the skill of modern design companies.

It was this desire to provide a different interpretation of one’s story and of one’s journey in the world of design, filtered through the expressive and emotional tenets of art, that guided companies like Living Divani and Kartell in the celebration of their respective anniversaries at the Fuorisalone. Living Divani commemorates 50 years since its foundation and 30 years of art direction under the faithful leadership of Piero Lissoni with a specific exhibit entitled “The Uncollected Collection”, a limited edition collection created by the designer to celebrate and seal this double anniversary, on display at Palazzo Crivelli (Via Pontaccio 12).
Meanwhile, “The Art Side of Kartell”, hosted at the Palazzo Reale, is the exhibit that celebrates the 70th anniversary of the company, led by Claudio Luti. In the words of Rita Selvaggio, curator of the exhibit together with Ferruccio Laviani, “It is a journey that does not follow a timeline, but rather relies on assonance, parallelism, déja-vu, and overlapping languages to represent Kartell’s 70 years of history, which are also 70 years of design and culture.”