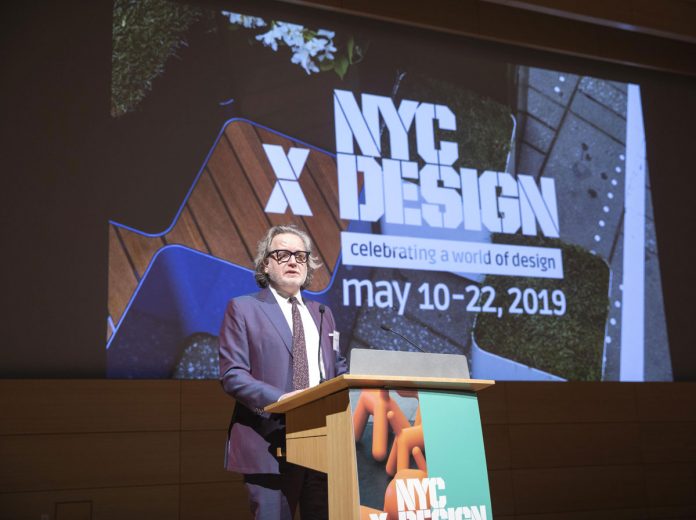 The annual event that next May will transform New York into a hub dedicated to the culture of design is unveiled in a dense programme, a celebration of creativity involving galleries, stores, museums, schools, districts: from WantedDesign to ICFF, from Times Square in Soho, from NoMad to Brooklyn. Presented at the Parsons School of Design in Manhattan by NYCEDC – New York City Economic Development Corporation, NYCxDESIGN takes the stage.

It is a choral celebration of the culture of design, now in its seventh edition: from 10 to 22 May 2019 installations, symposia, openings and exhibitions will animate every district of New York. “NYCXDESIGN has become one of the largest festivals, attracting over 336,000 participants to nearly 400 events, contributing to boosting the city’s economy,” said James Patchett, NYCEDC President and CEO of NYCEDC. A Design Festival set to the rhythm of many events including the NYCxDESIGN Awards which on 20 May will decree the winners of the prize organised with the magazine Interior Design and ICFF (registration from 1 February to 5 April on www.NYCxDESIGNAwards.com).

After the pop-up presented at the last Design Week in Milan, coming to New York is The Diner by David Rockwell and Surface, an operating restaurant that immerses visitors in a coast-to-coast journey between the States. At Times Square Design Pavilion returns (10-22 May) and its collaboration with Nasdaq; Sound & Vision celebrates the interaction between design, technology and sound, in a challenge between designers organised by the American Design Club. From 19 to 22 May ICFF presents its new proposals including ICFF Contract – with brands like Bernhardt, Arper, Poppin, Blå Station, Kartell and a special collaboration with Tom Dixon; ICFF Connect, created by CEDIA Expo, with the latest technological innovations; Ventura New York and contemporary Dutch design.

Also this year, WANTED DESIGN unveils the most interesting projects on the global scene: at Industry City (16-21 May), over 30 international schools and the OUI Design format in collaboration with the French Embassy and FACE; in Manhattan designers coming from Mexico, Brazil, El Salvador, Colombia, Chile, Canada, France, Launch Pad competition and the new “Tools for the Apocalypse” with SVA students invited to face the disasters of climate change.
A vision also transposed in the Nature-Cooper Hewitt Design Triennial exhibition (opening 10 May) organised with the Dutch Cube Design Museum, while at MoMA, “The Value of Good Design” explores democratic design from the 1930s to the 1950s. Among those of the Design District, on 16 May Tribeca will open with its showrooms Colony, Stillfried, David Weeks Studio; SoHo on 18 May with made in Italy companies such as Artemide; NoMad presents an installation by Jacopo Foggini for ddc and the awaited debut of Baccarat la Maison at the Luxury Living Showroom.

There are also numerous stores and pop-ups: from WallpaperSTORE * to Kinder MODERN + USM to the British brand Tala. Hosted by Mast Books, “Errata: Books Do Clutter a Room” – from 16 to 31 May – brings together works by Spanish designers including Pablo Alabau, Tomas Alonso, Julen Ussã, while the gallery Friedman Benda investigates the pioneers born between 1965 and 1980 such as Anastassiades, Bakker, Baas, Carbonell, Cocksedge, Heatherwick … Among the tours dedicated to public art and events presented by the schools Pratt, Parsons, Cooper Union, FIT, the Design Festival has an increasingly international vision.

In expectation of the new format for the 2020 edition under the management of SANDOW, global leader in media design and innovation, chosen by NYCEDU as a new operator. Founded by Adam Sandow with the aim of building a company that reinvents the traditional publishing model, it includes content and services for design, as well as the brands Interior Design, Luxe Interiors + Design, Galerie and NewBeauty, Fred Segal, Material Connexion, Material Bank and its latest venture in partnership with Questlove: Creative House. “Our goal – said Adam Sandow – is to create the most engaging, expansive and inclusive design platform in the world. We look forward to working with the partners of the city to achieve great successes and continue to make New York the centre of design.”

Winners of the Best Décor Award 2017 among the exhibits at...