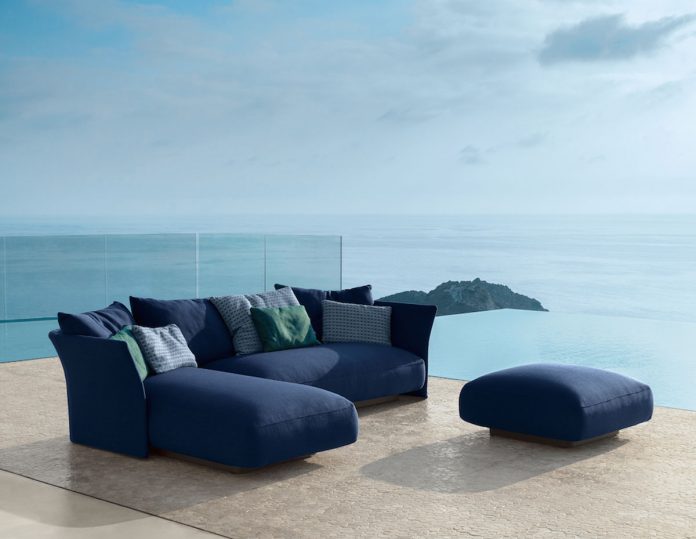 In 2007, the arrival of the economic crisis, but for Talenti it was the moment of change …
I travelled a great deal and went everywhere, and this helped me to learn about and open my eyes to worlds that are different from our own. I felt a great desire for change and decided to present a contemporary outdoor collection and one in a more conventional style, divided (or joined) by a bridge that for us in fact meant the idea of ​​change. The competitors of that time told us that we were neither fish nor fowl, that we were not ready for a similar step. But we went ahead, we met new designers who helped us to change until the image of producers in the classic style disappeared and the new course of Talenti was affirmed.

In 2010 Karim Rashid arrived, what significance has this had?
Karim went up one side of Talenti and down the other. When he arrived, he revolutionised it. Thanks to him we managed for the first time to enter the Salone del Mobile (the waiting list was very long), we were in pavilion 24 in the middle of the mattresses, but finally we too were there.
Rashid was very popular at the time, he always had a swarm of people following him, he was a “social” man when social networks did not yet exist. He immediately intervened on the company brand, from the logo to the business cards to the writing paper and – of course – on the stand of the Salon: we presented ourselves with a dazzling fuchsia and thus Talenti Outdoor Living was born. Thinking about it today, I have to say that it was a leap into the unknown, but the collections were very popular and we went ahead, even more convinced than before.

Six designers have signed your collections, how would you define each of them?Palomba is refined, exclusive and difficult, Rashid is a dreamer and a bit crazy and creative, Esteve is a true guru, futurist and magical, he manages to show the company what the company does not see, Visentin is ductile because he manages to follow my sudden changes of mind, Acerbis is an elegant dreamer and was born for the interior, Serio is a complex man and a little sombre, but at the same time is pleasure-loving.

Was Casilda by Esteve the collection that has marked a fundamental moment for Talenti?
Surely Casilda is the third turning point (the second was with Rashid) of Talenti and it has projected us into the dimension of the great names, those with whom we compare ourselves, such as Kettal and Manutti, just to give two examples. Casilda is a truly innovative product, made of painted stainless steel and I can’t even tell you how many thousands of hours of salt spray tests it underwent, with virtually indestructible cushions: a highly sought after product with soft and simple lines, the result of a great deal of research, with that minimal mood that is triumphing everywhere, but rich in materials, from travertine to plastic, from wood to cottons. Esteve has created all this.

Is there a fourth turning point on the horizon?
I have to say there is. We are contacting other national and international designers with different styles and ways of thinking and among the many we are considering, there is a French designer that we really like, but obviously, I can’t disclose the name right now.

How can we define the company’s growth?
The turnover of Talenti is distributed 55% abroad and 45% in Italy. From the point of view of Italian distribution, we have 350 active customers who, just to qualify the trade that we have carefully chosen, in the month of August, there is less than 2% of outstanding receivables, a pittance, and for these clients we are a company of primary importance and there is mutual respect. Contract work in Italy is growing but still involves limited numbers, making it one of our goals for 2019.
Abroad, on the other hand, contract work represents 40% of the export turnover.
Growth in 2019 will also pass through a major change that we will make in Dubai: in January we will abandon the Design District (too much hype and too little substance) and will be moving to the Business Bay where we will open our office with an internal showroom and a luxurious lounge designed to accommodate A1 type customers, those that frequent that area which is also home to many embassies.

B+K, the anthropologists of design

In the realm of the sublime