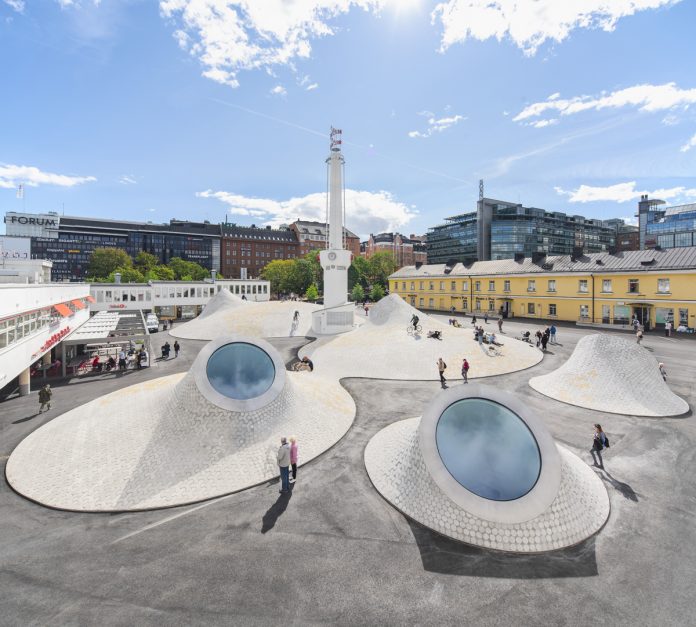 A series of domes and skylights emerge from the ground and flow together in an undulating dance on the surface of Lasipalatsi Square, in the very centre of Helsinki. This is the scenographically visible portion of a much more substantial project: that of the new and recently inaugurated Amos Rex art museum, the work of the JKMM architectural group.

100 architects and designers, all based in Helsinki, worked together to bring past and future together, starting from the idea of the historic Amos Anderson museum. The past is provided by the historic piazza, a true monument of the city, which generously provides access through ‘its’ modernist masterpiece, an entirely glass pavilion dating from the 1930s which was already the object of a conservation project by the JKMM team in view of the structure to be realised. As well as by the Bio Rex cinema, an auditorium that serves as a connection between the new and the pre-existing, restored to its 550 seats and open to the public as both art house and venue for film festivals.

Meanwhile, the future comes through an innovative design approach that conceived of the development of the museum space underground. It took 5 years and €50 million to dig out 13,000 cubic meters of rock and create an area measuring 2,200 square meters in which to house galleries and offices and, above all, provide flexible exhibition spaces for artistic performances and for changes to the art itself.
An adaptability ensured by specifically designed technical grids which have given life to, for example, an area entirely clad in panels – including the floor – suitable for artistic multimedia projects. In fact, Amos Rex is revolutionary not only in its architecture, but also in its concept. Actually it is the first that is a result of the second, which brings together different types of art, sometimes conflicting in terms of era and expressive medium, in the name of an art which is free of prejudice and temporal restrictions.

Kai Kartio, the museum director, explains: “We are inspired by ancient cultures, by 20th century Modernism, and by contemporary art. The objective, whether we’re talking about the past, present, or future, is to produce unique and surprising experiences. For this reason it was important to create a space that would be malleable to the various artistic evolutions it would host.

” The interior, with the underground portion illuminated by the natural light filtering through the external skylights which have redesigned the piazza and created new social dynamics, is therefore designed to celebrate a 360° concept of art. Also through interior design choices. Like the lighting installation by Petri Vainio which covers the ceiling of the entrance with 318 programmable LEDs, from the Doctor Design company, suspended on spirals of flame-retardant fabric.
As well as designer furniture by Artek, Sellex, ClassiCon, and Nikari . The exhibition calendar begins on 6 January 2019 with an exhibit by the Japanese collective teamLab which, with Massless, stages evocative and interactive digital metamorphoses in which visitors can fully immerse themselves.

Fantoni makes a stop in Sweden