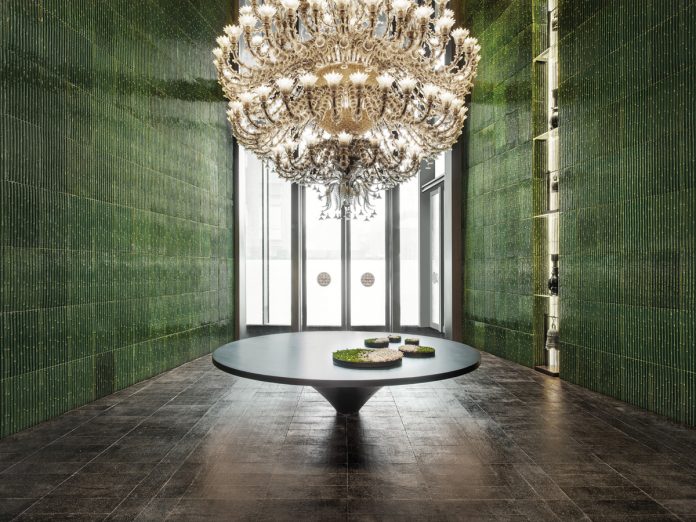 During Salone del Mobile.Milano Shanghai, the Chinese metropolis has become the world capital of design. This thanks to all the new projects carried out every year that are turning Shanghai into a Design-oriented city.

Below some of the best projects presented there in the recent months.

Located within the cultural preservation zone of Xuhui District, Capella Shanghai, Jian Ye Li is Shanghai’s only all-villa urban resort, and one of the last remaining clusters of shikumen architecture dating back to the 1930s. Capella Shanghai comprises 55 shikumen villas and 40 luxurious serviced residences. The design concept, created by Jaya Design International, embodies the spirit of Jian Ye Li – reflected in the fusion of French and Chinese elements, a nod to its heritage and the golden era during the 1930s.

RoarcRenew has renewed the space of Carlowitz & Co (from the third to the fifth floor). The studio has recovered the original structure of the office (dating back to 1898), the concrete walls and the architectural structure, giving the environment a historical and cultural touch, combined with the choice of a modern and aesthetic interior. For a continuous dialogue between the old and the new.

Founded by Chinese couple collectors, Mr. Liu Yiqian and his wife, Ms. Wang Wei, the Long Museum owns two huge places for exhibition and related functions: Long Museum Pudong and Long Museum West Bund. Designed by Chinese architect Liu Yichun, the main building of the four-storeyed Long Museum West Bund is a unique umbrella-vaulted structure. The first and second floors are devoted to contemporary art including paintings, sculptures, installations, and new media. The surface of the vault is built by the concrete with a fine and smooth texture. Visually, it is in concert with the fashion space, “Hopper Corridor”(doulang), which was transformed from the former “Coal Hopper” (meiloudou) construction at Beipiao Port. The first basement is the permanent exhibition area for precious artifacts in ancient China and art works of the Republic of China. Resembling a “white box,” the rectangular exhibition hall highlights the historical continuance and intellectual profoundness of traditional Chinese art.

The Middle House, located in the heart of Shanghai within bustling HKRI Taikoo Hui, provides guests with an intimate and urban sanctuary in one of the world’s most dynamic cities. The spirit of modern-day Shanghai is palpable through The Middle House’s 111 modern studios, varying from 50 sqm to 100 sqm, a gallery suite and a Penthouse – all influenced by celebrated architect Piero Lissoni’s sumptuous and sophisticated interior design. The design draws inspiration from the city’s rich heritage of craftsmanship and culture, marrying minimalist style with classical Shanghainese elements. Throughout the property, guests will find cultural touches and artwork inspired by Shanghai.

Ultraviolet by Paul Pairet is considered to be one of the most avant-garde restaurants and mysterious in the world. With a single table of ten seats and only dinner served, it attempts to unite food with multi-sensorial technologies in order to create a fully immersive dining experience. Dinner unfolds as a sensory play choreographed by chef Paul Pairet and the Ultraviolet Team. Specifically equipped with multi sensorial high-end technology, the dining room is dressed-up by lights, sounds, music, scents… a cool air blow, an immersive projection, images, imagination and food.

Designed by the leading hospitality design firm WATG and affiliated design studio Wimberly Interiors, the Bellagio Shanghai presents sophisticated luxury alongside timeless class. Bellagio Shanghai has 162 luxurious guest rooms and suites. More than 1000 art pieces have been curated from around world and are carefully placed throughout the hotel, to tell the story of uncompromising luxury, inspiring beauty and unprecedented splendor. Situated at the northern end of the Bund where the past pivots into the futuristic view of Lujiazui, it’s a perfect interpretation of the brand’s belief – “Nothing Short of Unforgettable”.

The court of design collecting

Pure design in the East London