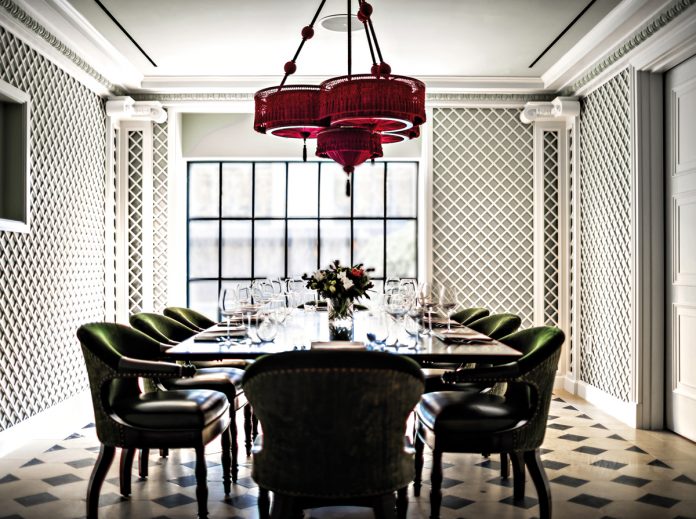 The NoMad Hotel first established its distinct luxurious brand in 2012 at 28th Street and Broadway in Manhattan, with a food and beverage program operated by industry stars Daniel Humm and Will Guidara. Owners Sydell Group collaborated with Humm and Guidara — as well as key members of the core New York team who relocated to the West Coast — to ensure the same level of quality and service in Los Angeles.

Garcia’s sensibility is seen throughout the 1923 building, originally known as Giannini Place and built as the headquarters of the Bank of Italy in downtown L.A.’s bustling historic core. The Paris-based designer’s interiors complement the original elaborate 1920s details, such as the bronze doors, coffered lobby ceiling, and massive bank vault that were meticulously restored during construction. Multiple vignettes throughout the lobby and public spaces, such as a lush tropical-inspired area adorned with palm trees and green velvet-upholstered and whimsically fringed seating, translate to different ambiances contained under one roof.

Functionally speaking, the NoMad Los Angeles is truly a 24/7 location. With custom built pieces covered with velvets in deep shades of purple, green, blue and pink, plus bursts of brocade floral patterns and echoes of exoticism, the double-height lobby makes for an overall inviting setting that hums as a lively urban gathering space. While some visitors chose to cozy up next to a roaring fireplace or enjoy a multi-course meal in the Mezzanine restaurant, others can have a pastry and coffee at the corner casual Coffee Bar — the NoMad’s answer to Caffe Florian in Venice — complete with mirrored walls, gold details, red Murano glass chandeliers, and a portrait of Saint Vibiana (the patron saint of Los Angeles). Starting at 4:00 p.m., registered hotel guests get priority access to the Library, which is stocked with reading material and boasts two 12-foot tall handmade lighting fixtures fabricated by Atelier de Mandres in France. The good vibes and elegance continue up to the rooftop pool lounge.

The 241 guest rooms and suites showcase more of Garcia’s eclectic traditionalism. Bathrooms feature soaking bathtubs with vintage-inspired hardware and all the amenities one would expect from a hotel of this chic and hip caliber. In addition, the creative and branding firm be-pôles curated the art program on view throughout the public spaces and rooms that showcases a wide ranging yet cohesive mix of vintage photographs and prints, along with specially commissioned pieces that were mostly sourced in Italy and California. In downtown L.A.’s quickly expanding hotel scene, NoMad stands out from the crowd.

Cutting-edge kitchens for over 60 years

The shape of movement