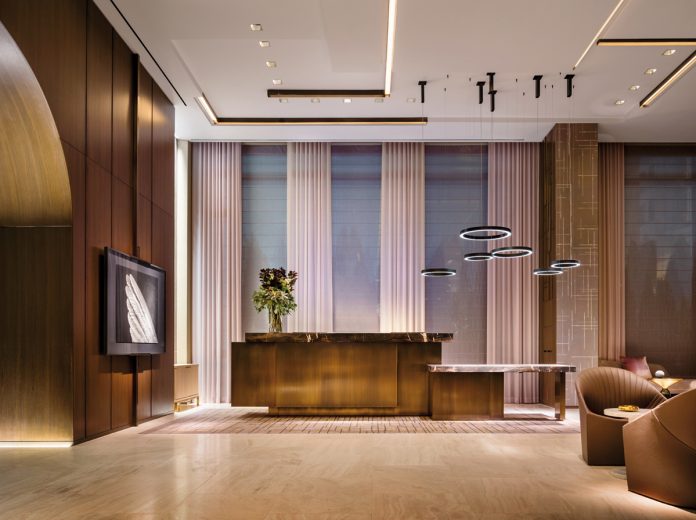 “We were going against the grain of the classical Robert Stern architecture of the building and felt that the design should be more modern; the perfect foil,” says George Yabu, his partner, Glenn Pushelberg adding, “It was a story of uptown downtown. We felt that the downtown customer was younger professionals, maybe bankers, while uptown was more established, older customers.”

Upon entry to the Four Seasons Downtown, located just across the street from Santiago Calatrava’s masterful Oculus, guests are greeted with a rather unusual lobby footprint—one that is long, tall (ceilings are nearly 5 meters) and narrow and has no immediate suggestion of a hotel reception. Sleek travertine floors are complimented by fumed oak walls and artwork such as Bruno Billio’s stacked bronze sculptures. To the left is the check-in desk, hewn of layered stone planes, asymmetrically stacked for added interest and presided over by Henge pendants that appear to be deftly hovering over the space like mysterious UFO’s. A series of lounge spaces and a coffee bar celebrate the trend of the social lobby and shared workspace, a must-have for Four Seasons’ trendier downtown customer.

Following into the elevator lobby, a series of corridors are, as Pushelberg explains it, “off kilter,” designed to be more meandering than orthogonal, and echoing the winding streets of the hotel’s financial district neighborhood. A monumental stair leads to the second floor events space. “To accommodate the number of risers we needed to achieve the height while following code, we had to make a lot of hairpin turns,” Yabu says, of the stair which features a massive pendant sculpture by Studio Sawada. Light streams into the space from an adjacent courtyard playing off a linen-like special finish on walls with mother of pearl inlays.

The hotel’s long and narrow footprint also presented a challenge to the design of the spa, which Yabu is quick to call “one of the toughest spaces we’ve ever designed.” Once again Yabu Pushelberg chose to employ asymmetrical, meandering corridors, set in clean, tranquil Alexandra Nuvolato stone.

“In the past, going to the Four Seasons has always been like visiting your very wealthy auntie,” jokes Pushelberg as he sums up the key difference between the two New York properties. “The Four Seasons Downtown will never be as grand as 57th Street but it’s the younger, cool brother or sister. It’s a quiet non-statement — it’s not trying to be anything.”

Pavillon Dufour, from the 18th-century Grand Projet to Dominique Perrault

Hospitality in China among tradition and modernity