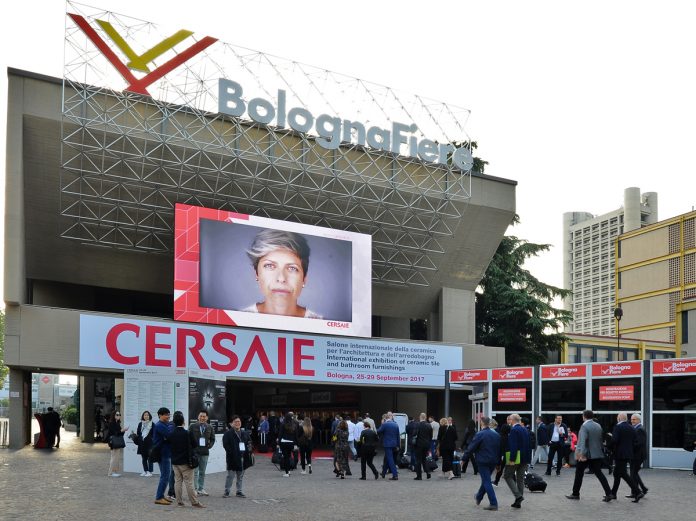 The 2018 edition of Cersaie promises to be a great success. Events related to design, music and culture will feature at the most important international showcase for the ceramic and bathroom furniture sector. Fiera di Bologna will welcome distribution professionals, architects, interior designers, designers and large construction companies from five continents in its large exhibition area, which measures 161,000 square metres, 5000 more than in 2017, thanks to three new Pavilions: 28, 29 and 30.

From 24 to 28 September, the public and industry experts will be able to visit the stands set up by 840 exhibitors from 40 countries, 452 of which work in the ceramic tile industry. 314 foreign companies are attending, demonstrating the international importance of the fair. The many events range from the economic conference to The sound of design, Cersaie Disegna la Tua Casa (Cersaie Designs Your Home) and the Città della Posa (City of Tile Laying).

The ribbon cutting ceremony is scheduled for Monday 24 in Piazza della Costituzione, with the economic conference at the Europauditorium in the Palazzo dei Congressi. The event’s participants will include the President of the European Parliament, Antonio Tajani. This will be followed by the Ceramics of Italy international press conference, starting at 18.30 in Palazzo Re Enzo, where the XXII Ceramics of Italy Journalism Award will be awarded, the prize for the best article published in a foreign magazine dedicated to Cersaie and the Italian ceramic industry. The winner of the 2007 Pritzker Prize, Richard Rogers, will give a guest lecture on 25 September.

The Galleria dell’Architettura will host Portuguese architect Canilo Rebelo at 16.00 on 26 September. The architettura della tolleranza (architecture of tolerance) conference will be held on Thursday 27, coinciding with the opening of the seventh edition of Cersaie Disegna la Tua Casa at the Agorà dei media. Other notable events include The Sound of Design exhibition, split between Pavilion 30 and Galleria Cavour in the centre of Bologna, as well as the seventh edition of the Città della Posa in Pavilion 31, where the master tile layers of Assoposa will give a demonstration.

Stockholm on the creative scene

Shanghai is waiting for CIFF