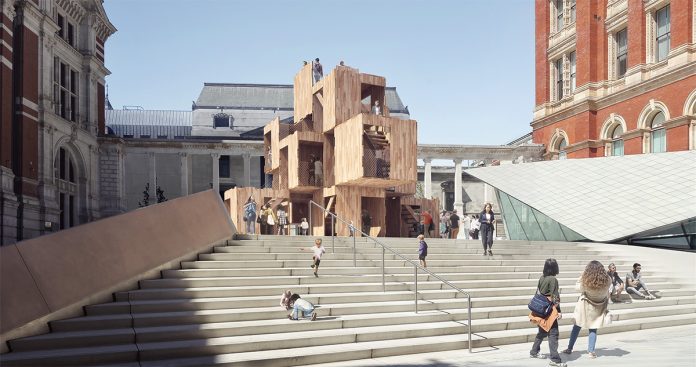 An array of projects will bring the city to life, inviting people to play, experiment and have fun, with particular focus on celebrating ten years of the festival’s collaboration with the Victoria and Albert Museum, by means of nine days of installations, talks, tours and workshops. Tristam Hunt, director of the V&A, explains: “This year’s programme is bigger and more ambitious than ever. It’s a unique opportunity for major designers to interact with the museum’s international art, design and performance collections. London Design Festival confirms the centrality of London, as the world’s design capital”.

MultiPly, by Waugh Thistleton Architects with American Hardwood Export Council and ARUP, is an installation particularly worthy of mention on the map. A modular, labyrinthine and interactive structure, the first to be presented at The Sackler Courtyard at the V&A, encouraging visitors to rethink the way in which homes and the city are designed and built. A three-dimensional construction created from a system of reusable panels which can be assembled and disassembled, made from 60 cubic metres of American Tulipwood. Lastly, the line-up of designers includes Michael Anastassiades who with The London Fountain Company will present A fountain for London, a prototype for a new drinking water fountain which can be viewed both in the Brompton Design District and theV&A. A virtuous project to reduce the consumption of small bottles of water and promote the fruition of free drinking water, while saving money and plastic

The Bay of creativity

Salone del Mobile 2017, a vision of the future